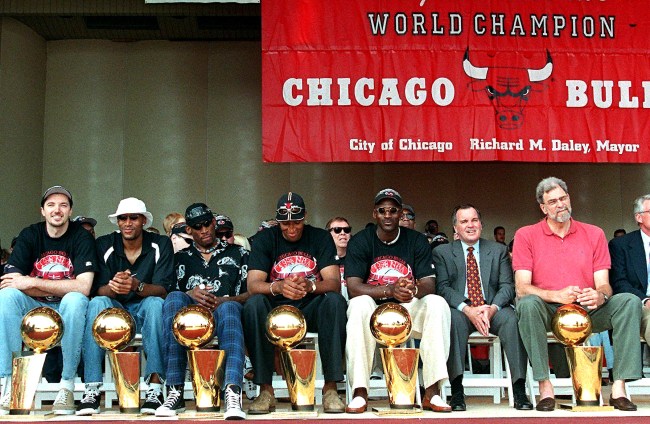 Jordan added, “It’s maddening. Because I felt like we could have won seven. I really believe that. We may not have, but man, just not to be able to try, that’s something that, you know, I just can’t accept. For whatever reason, I just can’t accept it.”

Then, in another display of his fierce competitiveness, he pointed out, “They can’t win till we quit.”

Unfortunately, there was just too much to work out, and Chicago Bulls owner Jerry Reindsorf with input from general manager Jerry Krause ultimately decided to blow up the team.

Not that Reinsdorf didn’t try, or so he claims.

But even if he had succeeded in getting the band back together one more time, he claims Michael Jordan wouldn’t have been able to play that next season anyway.

As many forget, the 1999-99 NBA season was shortened due to a lockout, and during that time Jordan injured one of his fingers.

“The thing nobody wants to remember,” Reinsdorf told ESPN’s Ramona Shelburne, “during lockout, Michael was screwing around with a cigar cutter, and he cut his finger. He couldn’t have played that year. He had to have surgery on the finger, so even if we could’ve brought everybody back, it wouldn’t have made any sense.”

Jordan, however, disagreed, saying at the time, that if he knew Phil Jackson and the rest of the team were coming back he wouldn’t have been at a golf tournament in the Bahamas messing around with a “cheap cigar cutter” severing a tendon in his right index finger.

The injury, Jordan said, would have put him on the sidelines for two months of the already shortened 50 game season.

“…my decision was made before this happened, and from what doctors have told me, that even if I chose to play, I wouldn’t be able to play for two months. But that never had any factors in terms of my decision,” said MJ.

“I can still shoot,” Jordan told the Chicago Sun-Times in 2000. “But I can’t grip the ball completely. I have a tough time picking it up off the dribble like I used to.”

So could he really have come back for a run at ring number seven?

“The fact is, it’s pretty obvious in 1998 that Michael carried this team,” said Reinsdorf. “These guys were gassed. He could not have come back because of the cut finger. But even if he could’ve come back, the other players were going to get offers that were way in excess of what they were worth.

At least with regard to that, Jerry Reisdorf is probably correct. The rest? That will always be up for debate.