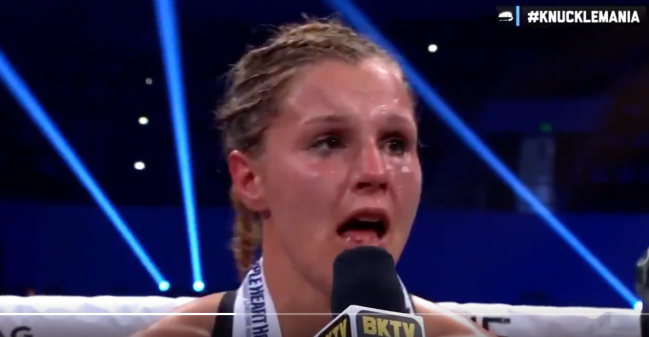 The question on America’s mind as we inch closer to Friday’s BKFC 19 is what is Britain Hart, exactly?

Before BKFC Knucklemania’s victory over Paige VanZant in February, most reasonable humans would guess she’s a human, just like you and I.

But in the in-ring interview after the 48-47 W, the 31-year-old revealed to the captive BKFC audience that she is, in fact, a feeling. A sentient emotional state.

Britain Hart is confirmed to be the first unhuman visible feeling known to this earth pic.twitter.com/9jQT0LzkDk

“I’m not a person, though. I’m a f*cking feeling. And all of you guys are going to feel it.”

Why does this make no sense and the most sense at the exact same time. I want to be a feeling too. Can I be a feeling?

In BKFC 19 this Friday night in Tampa, Florida, Hart is facing off in a grudge match against Jenny Savage, who back in February stormed the ring in attempt to steal Hart’s shine following the most prominent win of her career.

Lost in Britain Hart’s epic “I am not a person, I am feeling” promo was when she poured water on Jenny Savage after she stormed the ring.

Hart was clicking on all cylinders last night, folks. pic.twitter.com/pesBRJv50o

Some are saying this remix is better than anything off Donda.

All aboard the Hart Train. Feelings only.