Attorney Says A 24th Lawsuit Will Be Filed Against Deshaun Watson: Fans React 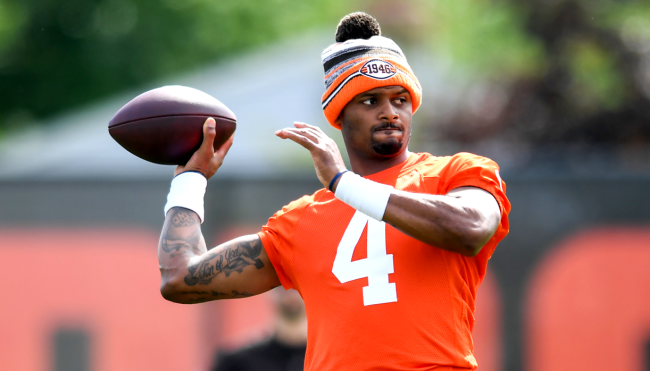 On Tuesday, it was revealed that another woman had filed a lawsuit against Deshaun Watson over alleged inappropriate conduct.

The woman who filed the lawsuit, the 23rd to be filed against the new Cleveland Browns quarterback, had not planned to sue, but changed her mind after viewing two other accusers speak on Real Sports with Bryant Gumbel about their cases last week.

According to ESPN, “the lawsuit states that the plaintiff had her first massage session with Watson during the summer of 2020 and that his ‘behavior grew worse.’ During the third and final massage, she alleges in the lawsuit that Watson exposed himself to her, touched the woman between the legs and ‘repeatedly requested’ her to have sex with him.”

She also claims that Watson’s legal team had contacted her and attempted to “intimidate” her as they searched for the women who had filed civil lawsuits against Watson.

On Wednesday, ProFootballTalk.com reported that in addition to this new, 23rd lawsuit filed against Deshaun Watson, a 24th may soon be forthcoming.

Attorney Tony Buzbee, who represents the 23 women who have already filed lawsuits against Deshaun Watson, told the media on Tuesday, “I will be filing a 24th case soon.”

Buzbee did not provide any further details.

Watson has denied the allegations made against him and a grand jury declined to indict him in March after a police investigation of 10 criminal complaints that were filed by women with Houston police against the quarterback.

“Deshaun Watson vehemently denies the allegations, just as he has since she first discussed them with members of our firm in March of last year,” Watson’s attorney, Rusty Hardin, said in a statement. “She repeated the allegations on social media in August and he denied them then. The only thing new about her contentions is the embellishment making them more extreme than prior versions. Deshaun’s denial remains the same.”

Several NFL fans expressed their thoughts on a possible 24th lawsuit being filed against Watson on social media following the report.

So 24th lawsuit coming up for Deshaun Watson…that’s only 4 shy from his win total in the NFL. pic.twitter.com/ytU11SWhR9

Buzbee is doing everything he can to force a settlement. 24, 25 it won’t matter Deshaun will be the Browns QB. Still no criminal charges

The NFL is akin to a 🤡 show…a perverted one 😏

A 24th lawsuit will be filed against Deshaun Watson - ProFootballTalk https://t.co/m34K95ryk5

The young lady seen how much Deshaun was paying out for the settlement that she wants to join the party. It’s a sad thing, but Deshaun hasn’t being proven guilty, according to the courts. The Texans should sued Deshaun for theft.