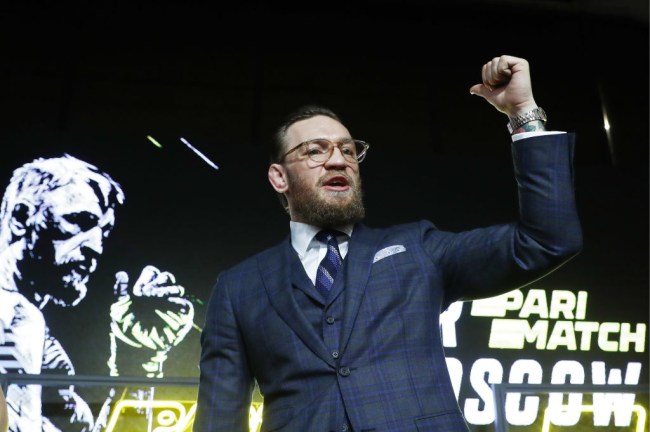 During a press conference in Moscow on Thursday Conor McGregor announced his plans for 2020 and his return to the octagon on January 18th in Las Vegas.

While the majority of the questions asked by the media were centered around fighting – and Kabib – one reporter towards the end of the event asked McGregor about the recent sexual assault allegations involving the Irish man.

The question was asked in Russian, but according to Aaron Brewster of TSN and Business Insider,  the reporter began his question by including the phrase ‘Conor McGregor assaulted a 20-year-old woman.’ McGregor doesn’t speak Russian, therefore, a moderator was translating questions for McGregor, but she cut the reporter off by saying we’re not going to talk about that today and never mentioned the question to McGregor.

The reporter said this, according to Brewster: “Conor, my name is Annar. As an interviewer, I want to open you up from another point of view. Let’s move away a little bit from sports from Khabib. You are a top, top, top sportsman. I’m interested in your relationship with the mass media. Often we see news of not a very good nature. It’s like, ‘Conor McGregor assaulted a 20-year-old woman.'”

The host said this, according to Brewster: “We don’t want to talk about it now. Look, act normally. I know you for a long time. Act like a normal guy. Do you have another question? Let’s go to someone else.”

You can watch the entire exchange below:

McGregor has denied all of the reports accusing him of sexual assault.

Irish police have confirmed that it was investigating a sexual assault that took place in the Crumlin area on October 11th.