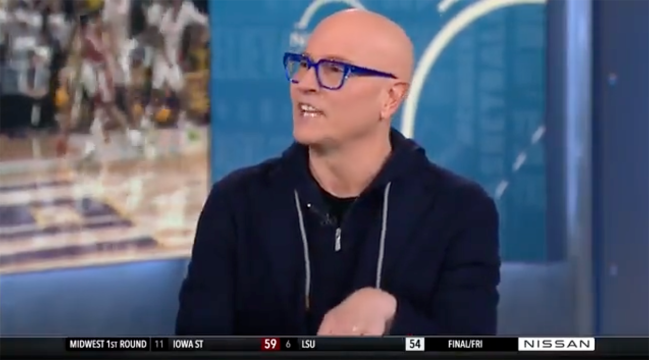 Rex Chapman, who was hired by CNN to be a host on its digital streaming service in January, has been a part of Turner Broadcasting’s in-studio team for March Madness. The decision to add the former University of Kentucky hooper and NBA veteran has been questioned by quite a few viewers over the last week who are not enjoying his presence.

In addition, people question Chapman’s activity on Twitter as someone who often takes other people’s tweets as his own— verbatim. It isn’t a great look and many people have wondered how he remains relevant and continues to get bigger and bigger opportunities.

On Saturday night, he made his biggest blunder yet.

Chapman made a very embarrassing mistake. He appeared to believe that former Providence, Xavier and Virginia head coach Pete Gillen is dead. He wished that he may rest in peace.

Gillen is not dead. In fact, he works with CBS, one of the networks on which Chapman’s studio show has aired.

It was a very awkward moment and Chapman was absolutely crushed online. Rightfully so.

When asked about the moment, Chapman explained himself. He got Gillen confused with Skip Prosser, who once coached at Xavier and tragically passed away at only 56.

So I just talked with @RexChapman. He made a mistake and was thinking of Skip Prosser.
Honest mistake on live television. We've all been there. https://t.co/3dMLair98n

While it might seem hard to jumble the two names, Chapman actually made a good point. For someone who is so often (rightfully) roasted for his actions, he was able to laugh at himself to some extent.

Rex Chapman was once a full-blown drug addict.

After Chapman needed to undergo an emergency appendectomy in 2000, he was offered OxyContin for the pain. It took him only two days to get completely hooked.

Not long thereafter, the former first-round NBA Draft pick was going through an astonishing 10 OxyContins and 40 Vicodins a day. Fortunately, he eventually went to rehab and has been clean ever since.

While he has a very questionable presence on twitter and is not the best in-studio host, it is important to remember where he came from.

Rex Chapman was literally a college basketball legend at Kentucky then played in the NBA 12 years. Turned his life around after drug addiction and that should be celebrated. Everyone deserves a second chance.

He even alluded to his past in response to his Gillen mixup.

Hey – spend a few years on drugs and you mix up these things. 😉Their Xavier connection got me.

It is no excuse for such an error, and he is definitely leaning on self-deprecation to relieve some of the tension. However, to his credit, it worked.

Chapman’s response is at least worth a chuckle and cuts through some of the awkwardness. That doesn’t mean he is good at his new job, and that doesn’t mean that he doesn’t plagiarize on Twitter, but it helps forgive the Gillen blunder just a little bit.