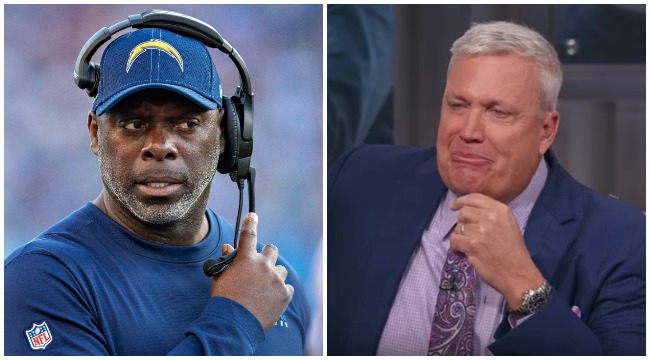 Is there someone in your life who illicit tears of pride at the very mention of their successes? Is there someone who you’ve encountered whose well being and happiness is synonymous with your own?

Anthony Lynn is that man for Rex Ryan.

Lynn, now the head coach of the Los Angeles Chargers, coached under Ryan during his tenure with the Jets and followed him to Buffalo where he worked his way up from running backs coach to offensive coordinator before becoming the interim head coach when Rex Ryan was fired.

A recent segment of ESPN’s Sunday NFL Countdown documented the philanthropical work Lynn is doing in Tanzania, raising $350,000 to a build a school for a village of 8,500 people where only 10 have been formally educated.

The segment caused Rex to openly sob while lauding the character of his old friend and colleague. I felt feelings and I hope you will too.

Rex Ryan got emotional talking about how proud he is of his friend and former assistant coach, Anthony Lynn. pic.twitter.com/MtJv4dxyrN

As much as this illuminates the character of Anthony Lynn, it says a lot about Rex Ryan too. In a narcissist-heavy league, it’s pretty awesome to see someone so genuinely take pride in someone else’s successes.

Good on you, Rex, you foot-loving bastard.

Sorry, derogatory statements are an involuntary response to me feeling emotions. Thanks, dad.