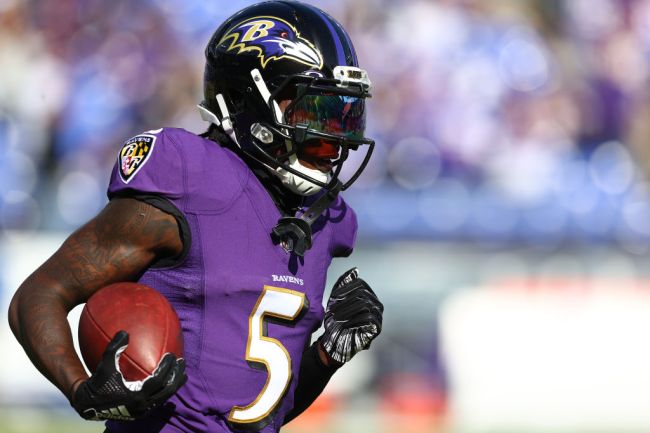 There were plenty of shocking moments during round 1 of the NFL Draft. Perhaps the most shocking was the Baltimore Ravens trading Marquise “Hollywood” Brown.

While there had been plenty of talk about players like AJ Brown, Deebo Samuel, and DK Metcalf all possibly being dealt before the draft, we hadn’t heard anything about Hollywood Brown potentially being traded.

Today, Robert Griffin III provided some clarity on what caused this trade to come about.

Marquise Brown wanted out of Baltimore because of Greg Roman NOT Lamar Jackson. Marquise knows G-Ro’s system runs through the backs and tight ends, so it’s unlikely a WR1 will get big money. The best way to get paid was to be in a pass first offense in @AZCardinals A THREAD 1/4

You certainly can’t argue with the thought process from Brown. He has had plenty of instances where he has flashed his talent, but it has rare for him to have sustained success with the Ravens.

His 1008 yards this past season were his most in a year by a wide margin so far in his career and that is due in large part to the Baltimore Ravens playing one of the most run-heavy offenses over the course of Brown’s career.

This is also something that has come before for Brown with him voicing his displeasure at his lack of usage.

That won’t be a problem for him in Arizona. Brown will now reunite with one of the two quarterbacks he caught passes from in college. Kyler Murray has thrown for at least 3700 yards in each of his 3 NFL seasons, a number that Lamar Jackson has never reached in the NFL.

Murray will also surely be all too eager to show off his arm strength with some deep throws to the speedy Hollywood Brown. With these two set to spend the next two years finishing out their rookie deals together, you can expect to see them put up numbers worthy of the big contracts they are each looking to sign.