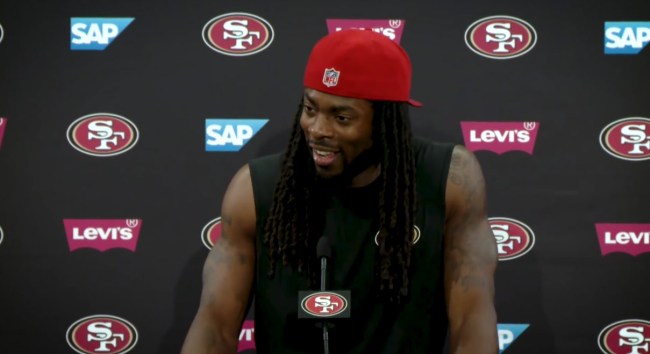 Richard Sherman is a future Hall of Famer with four Pro Bowl appearances in his career, who, at 30 years old, probably still has a few good years left in him. But, this time last year, the cornerback had just torn his Achilles, leaving him dispensable by his former team, the Seattle Seahawks. That led Sherman to sign with the team’s NFC West rival, the San Francisco 49ers, in the offseason.

Well, with so many questions about how Richard Sherman would recover from that potentially career-ending injury, the Niners didn’t just hand a ton of money to the defensive back, but, instead, protected themselves by tossing in a bunch of incentives — like roster and performance bonuses. One of those incentives? A 2019 Pro Bowl selection.

Unfortunately, Sherman got snubbed for this year’s Pro Bowl roster. And, while he’s probably not too upset about playing in a meaningless game in Orlando, he’s probably really pissed off about the amount of money he’s losing out on. That’s because, as NFL.com writer Tom Pelissero pointed out at the time of Richard Sherman’s contract this past offseason, it would have netted Richard Sherman an additional $3 million.

Richard Sherman with the most costly Pro Bowl snub in history pic.twitter.com/L0P8ShUnAa

Mike Garafolo, a colleague of Tom Pelissero’s at NFL.com, later broke down some of the different bonuses and incentives in Richard Sherman’s contract, actually reporting that the cornerback would have made an additional $1 million for making the 2019 Pro Bowl. Sure, there’s a major difference between $3 million and $1 million, but, still, when you’re speaking in seven digits, you’re talking about a sh*t ton of money.

I just imagine Richard Sherman has to be pissed off about this. I mean, that’d be a nice little bonus for Sherman to have after coming back from that brutal Achilles injury, suffering through a crappy season in which the Niners have won four games at the moment, and seeing his former team, the Seahawks, destined for the playoffs without him.

As for his Pro Bowl resume, according to Larry Brown Sports, per Pro Football Focus, opposing quarterbacks have thrown Richard Sherman’s way just 38 times the entire season, which is tied for the fewest in the NFL. So, while his stats may not be there on paper, he’s impacting the game in a major way.

I know Richard Sherman’s already made millions in his career, but losing out on this amount of money for something as arbitrary as a Pro Bowl selection has to leave a bitter taste in his mouth.