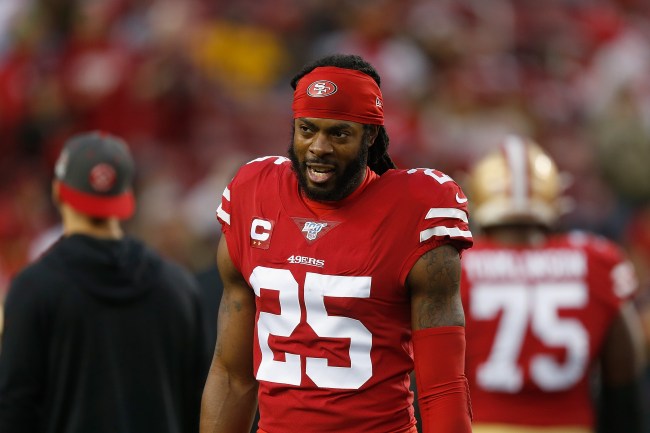 Richard Sherman is a future Hall of Famer, as the current San Francisco 49ers cornerback has proven to be one of the most dominant players at his position over the course of his nine-year career. Given the fact Sherman’s 31 years old — which, seemingly, is ancient for pro athletes — nobody should be surprised that he continues to shut down opposing wide receivers. However, for some reason, analysts thought that the guy’s career was spiraling downwards after he left the Seattle Seahawks a couple years ago.

For those who need a reminder, Richard Sherman refused to hire an agent after leaving Seattle for San Francisco, instead opting to negotiate his own contract — for one-year at $7 million — and focused on performance incentives so that he could prove his worth. That led many in the media to question the move, wondering why he made the decision he did.

Fans please find me all those “He negotiates a bad deal” receipts…. I wanna see something

Sherman seems to be keeping tabs on all those analysts, so just look at what the cornerback was able to find in the Twitterverse recently, responding in kind.

Maybe it’s a tale of players knowing their abilities and believing in themselves. More players have incentives that can’t be achieved and are negotiated by agents but hey let’s not talk about that https://t.co/Jet2cJoQyC

Damn, guys, Richard Sherman is out for blood with that kind of stuff. So why all the shade towards the media? Well, how about because the cornerback was just named to the AP’s All-Pro Second Team, meaning he just earned a pretty nice $2 million bonus for hitting an incentive in the deal that he negotiated.

By being named to the AP's All-Pro second team, 49ers CB Richard Sherman has earned a $2M incentive.

Again, he remains one of the most productive and impactful defenders in the league.

Say what you want to about Richard Sherman, but the guy has earned every bit of his NFL stardom. After being selected in the 5th round of the 2011 NFL Draft, the cornerback helped shape the attitude of the Legion of Boom in Seattle — which went to two Super Bowls (winning one) — and has continued to do the same for the Niners’ dominant defense this season. And, in a pretty awesome revenge story, Sherman’s lucrative bonus this season more than makes up for a missed bonus last season when he wasn’t voted to the Pro Bowl; something that cost him a cool $3 million in bonus money.

So, for all those who dare challenge Sherman, you better go in carefully, because he’s clearly capable of backing up every single thing he claims when on the football field.