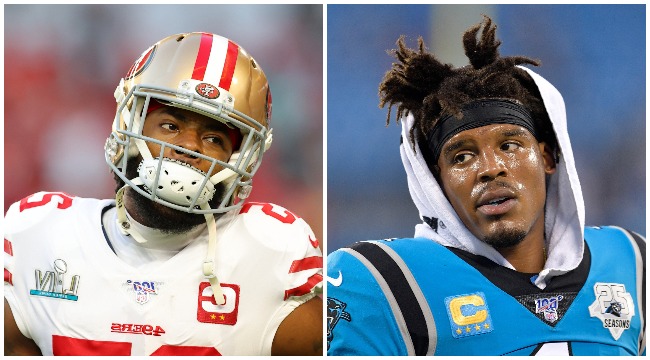 Cam Newton is a New England Patriot is a collection of words I never thought I’d string together.

Cam Newton is making Ryan Fitzpatrick money is another sentence my brain could not take seriously during the Obama administration.

Newton is coming off shoulder surgery in 2018 and the ever-nagging Lisfranc (foot) surgery in December 2019, which may be why we live in a world where this statement is true.

Chase Daniel is being paid more than Jameis Winston and Cam Newton COMBINED.

Richard Sherman has an opinion is a sentence I could type until I develop early onset arthritis.

The Niners cornerback thinks the three-time Pro Bowler got boned by signing a frugal deal with the Patriots, going so far as to call the signing “disgusting.”

How many former League MVPs have had to sign for the min? (Asking for a friend.) just ridiculous. A transcendent talent and less talented QBs are getting 15/16m a year. Disgusting https://t.co/eZycGL8qkZ

Those in support of Sherman’s claim:

Peyton had to sign a similar deal after missing a season due to career-threatening spinal fusion surgery right? Oh wait. pic.twitter.com/KMvq0DXg7h

Check that against every QB slated to be a starter this season. Let me know how that goes

Since his MVP season..and context of course doesn’t help his case either because teams don’t want injury prone players which is how he is viewed pic.twitter.com/wYEUEAs1Oj

Dude has been hurt for 3 years now. Stop trying to play GM

Those who just want to watch the world burn:

Didn’t you lose the Sb for your team by getting burnt by a bust WR?

Remember that time you got burned at a really critical moment in the Super Bowl?