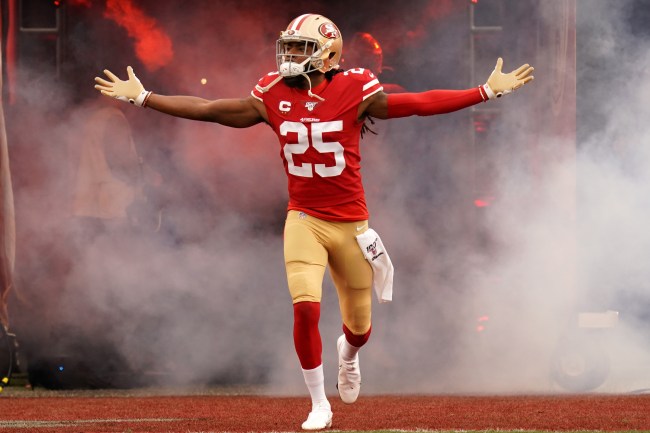 Richard Sherman is on his way to the Super Bowl but for whatever reason former cornerback Darrelle Revis decided to take a shot at him during Sunday’s NFC championship game.

Fear of getting beat in man to man coverage. Every snap every play. The fact that he doesn’t travel as a cornerback is lame. Except the challenge as the best and shut Adams down the entire game. Do it for the game of football. Stop hiding a cover 3 zone. pic.twitter.com/OWuzFtj8ov

All y’all think I’m throwing shade. I’m not. Just stating the man is not a pound for pound man to man corner. If you know the game of football he plays in a Cover 3 Scheme. He does not travel but traveling with a receiver is not for every DB. It’s a few on the corner list who can

Sherman saw Revis’ tweet after game and fired off this perfect response reminding Revis that he’s going to be watching the Super Bowl from his couch in a few weeks.

I would go in on this has been but I have a Super Bowl to prepare for. Enjoy the view from the couch. Your ninth year looked a lot different than this. Lmao https://t.co/jj3pwWYhVa

Update: Revis and Sherman kept going back and forth.

My 9th year I lead the entire league in turnovers. 5 Ints and 4 Fumble Recoveries. Enjoy the Super Bowl and strap up because this game you will have to cover. @RSherman_25 😂😂😂

I have to cover every game kid. I get my hands on the football in the playoffs something you will never know anything about. https://t.co/V6uFIvNQvT

And it’s “Accept”. Thought I would give you a lesson while I was here https://t.co/jj3pwWYhVa

Not sure why Revis is criticizing Sherman who has had a great year and has come back from a ton of adversity to be where he’s at. In the end it doesn’t matter because Sherm will be playing in Miami while Revis will be watching.

Tore his Achilles and had to find a new team.

Worked his way back to being one of the best corners in the game.

Tuned out the doubters and now Richard Sherman is back in the Super Bowl.

Following the 49ers NFC Championship win to head to the Super Bowl, an emotional, quiet & grateful Richard Sherman sat in a dark corner of the locker room, soaking in the moment. @RSherman_25 pic.twitter.com/rU9DU2dkQO