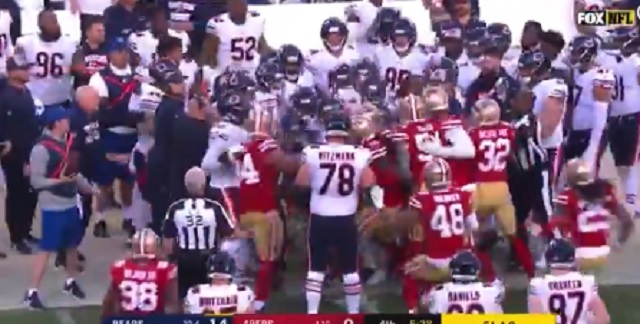 Things got heated between the San Francisco 49ers and the Chicago Bears on Sunday. It all started when Niners safety Marcel Harris delivered a late hit on a sliding Mitch Trubisky, and a full out brawl broke out on the sideline between both teams.

Dirty/late hit on Trubisky, Bears get mad, fight breaks out, @Ky1eLong comes in tossing bodies like a bouncer at the club. pic.twitter.com/kx3xrfCnFH

fight led to multiple ejections including Bears wide receiver Josh Bellamy and running back Anthony Miller and on the Niners, Richard Sherman was ejected.

Lots of ejections in the #49ers and #Bears game. Richard Sherman, Josh Bellamy, and Anthony Miller all get early showers!