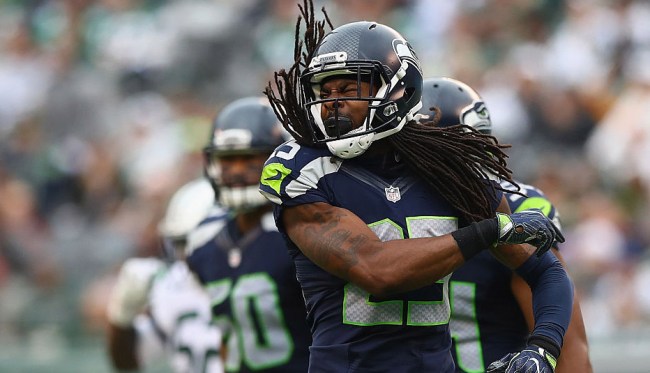 Richard Sherman has never be one to shy away from expressing his opinion, even if no one asked for it. So this week, when he was asked about running back Chris Carson’s ankle injury, he decided it would be a good time to complain about NFL fans and their love of fantasy football and gambling.

This new rant comes on the heels of Sherman railing against the NFL injury report last week for basically existing merely for gambling purposes. (Which, of course, it is, despite what the NFL claims.)

Richard Sherman rips the NFL on injury reporting rules: "Our injury report is specifically to make sure the gamblers get their odds right." pic.twitter.com/bTDlS5ZdeP

On Sunday, Sherman had this to say…

“I think a lot of people, a lot of fans out there have looked at players even less like people because of fantasy football and things like that,” Sherman said. “You go and say, ‘Oh man, this guy got hurt.’

“You’re not thinking, ‘Hey man, this guy got hurt — he’s really physically hurt and he’s going to take time to recover and it’s probably going to affect his mental state and his physical state and now he has a long, rigorous rehab.’ You’re thinking, ‘Oh, man, he’s messing up my fantasy team.’

So I guess we can now put Richard Sherman in the group that already counts LeGarrette Blount and Odell Beckham, Jr. as players who really don’t give a rat’s ass about your fantasy team. Good to know.