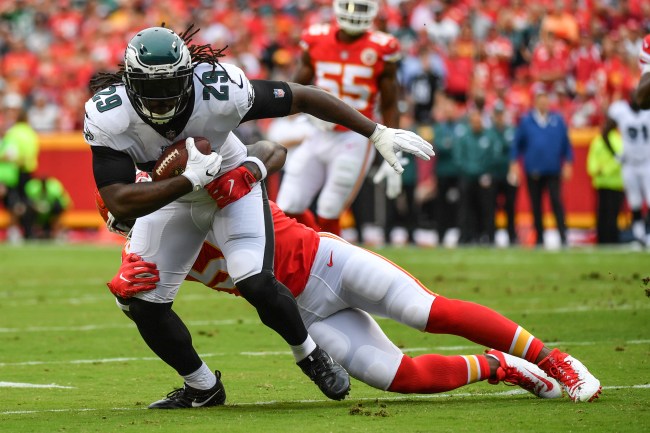 If you’re a fantasy owner with LaGarrette Blount in your backfield, you’ve probably been about as successful as a lemonade stand through two games. For the first time since 2012, the new Eagle did not have a single rushing attempt in a game. Week one against the Redskins wasn’t much better. The 30 year old rushed for just 46 yards on 14 carries, which pans out to just 3.2 yards per carry.

Mind you, Blount is coming off arguably the best season in his seven year NFL career last year with the Patriots, posting career highs in carries (299), yards (1,161), and touchdowns (18, an NFL high).

As you can imagine, fantasy owners who thought they were acquiring Blount on a hot streak have been wildly disappointed through two games. They hopped on Twitter to express their sadness.

A live look at all of LeGarrette Blount's fantasy owners. pic.twitter.com/KlFwHaIqbl

I was impressed with Wentz, Jeffery, the ageless Sproles, and Ertz today. Side note: Has anyone seen LeGarrette Blount? #Eagles

This is my first year trying fantasy football. I had Zeke & Blount today. It's going well.

Blount did what no disgruntled athlete should do after having a shitty game: responding to trolls.

I really could care less about all y'all fantasy teams, get outta my mentions with that shit. ✌🏿

Lettin ppl that are talkin trash know idc about fantasy football is a shot? Fans don't get me a job and get me paid, I do. Pumping gas 😂😂😂 https://t.co/FD2wjkS5qU

Moral of the story: Don’t piss of LeGarrette Blount.