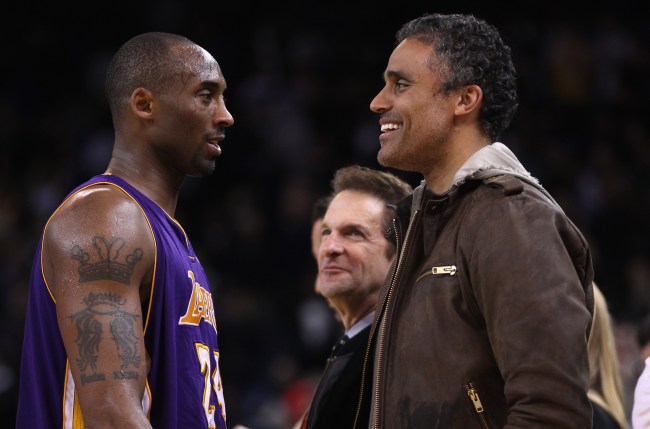 Keeping up with social media in real time on Sunday afternoon was an extreme sport. The ‘shoot first, ask questions later’ mentality from publications and blue checkmarks across the internet was at best irresponsible and at worst greedy and self-serving.

FOX: Kobe Bryant and 3 others killed.

I hope some people lose their jobs today for rushing reports.

Among those bogus reports was the death of former longtime Kobe Bryant teammate Rick Fox, a father of two.

Rick Fox is also dead because he was onboard OMFG

During a emotional segment of TNT’s NBA coverage Tuesday night, Fox joined Ernie and the gang to discuss how the false reports added an extra layer of chaos to the crushing news of his friend passing.

“My family went through, in the midst of all this, something that I couldn’t imagine them experiencing. One of my daughter’s greatest fears is finding out that one of her parents has been lost through social media, instead of from a loved one or a family member. And she fortunately called me and we were just talking and crying about the news of Kobe.”

The 50-year-old Fox claims his phone began ringing off the hook, but he did not answer any of them until his close friend and basketball coach, King Rice, called repeatedly.

“I’m seeing King’s number repeatedly going and going and going, and so I think he’s worried about me, so I said, ‘I’m gonna talk to my best friend,’ so I answered and said, ‘Hey man, this is crazy about Kobe,’ and he just was bawling,” Fox said.

“He was like, ‘You’re alive!’ And I was like, ‘Well, yeah. What do you mean?’ And it was in that moment that my phone just started going, and my mom and my sister and my brother [were calling].

“I’m glad [the rumor] is over with, but it was hard to deal with because it shook a lot of people in my life.”

Fox’s friend Kenny Smith broke down in tears when discussing finding out about Rick Fox being okay.

Kenny Smith get extremely emotional while telling story of when he found out Rick Fox was still alive despite reports at the time saying he was dead. pic.twitter.com/lfQWoC2sim

Hug yours tighter, ladies and gentlemen.