RIP To The Last Remaining Perfect Bracket That Was Killed By Purdue, Let’s Remember How Historic The Bracket Was 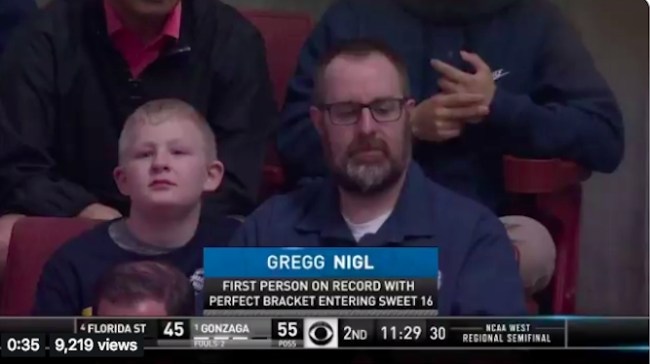 The last remaining perfect bracket was murdered by a questionable call at the end of the Purdue/Tennessee game that helped Purdue advance to its first Elite 8 since American Beauty won Best Picture.

40-year-old neuropsychologist Gregg Nigl correctly guessed the outcome of the first 49 games of the NCAA tournament, blowing the previous record of 39 straight games out of the water that was entered in 2017. He’s the first person ever to have a perfect bracket through 2 rounds of the men’s NCAA basketball tournament.

The most perfect bracket in history is done. With Tennessee’s loss, Gregg Nigl, who with Gonzaga’s win tonight, opened his bracket by picking the first 49 games right, takes his first L. His 49 out of the first 49 was 10 picks better than the previous record of 39 straight. pic.twitter.com/vLfOuYZuX4

The NCAA contacted Nigl on Monday and the dude had no idea he still had a perfect bracket:

“So wait, you’re saying I’m the first person to have ever done this?” Nigl asked when we told him the news. “This is wild. I can’t even believe it.

“I had no idea that this was even happening.”

To add insult to injury, Gregg’s loss had dropped him to 348th place in the standings.

But, but, it was so pretty.

WOW! Thank you everyone for the kind words about my perfect bracket, it means so much to me! And to think I almost didn't even fill it out!!! pic.twitter.com/5KUhHbzZ0F