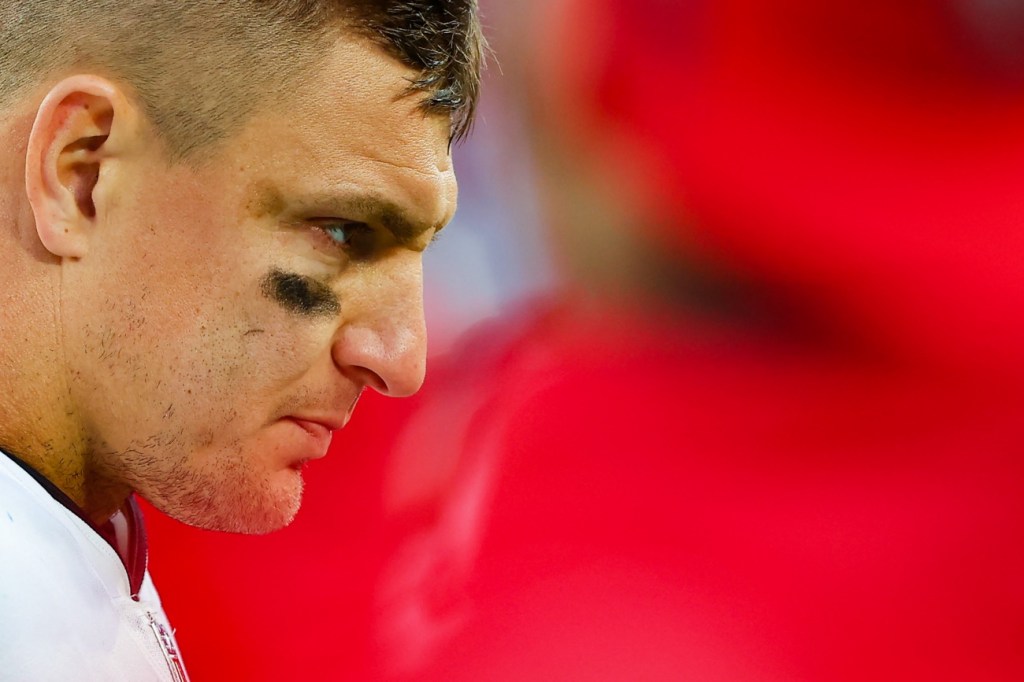 According to Rob Gronkowski, he is retired and that’s final. But if you talk to anyone else in his orbit that ‘finality’ is pretty questionable and it sure seems like the door is open for Gronk to come back from retirement for a second time.

Rob Gronkowski’s long-time girlfriend Camille Kostek recently spoke about her boyfriend’s retirement. Her comments left the door as wide open as possible. She said “I am an honest lady, and honestly, in my heart, I didn’t feel like this one is a forever one. So, I think maybe he’ll come back again. I feel like him and Tom are just having fun like, ‘Retired, not retired, retired, not retired.’”

And now a long-time teammate of Rob Gronkowski’s that won a Super Bowl with him in New England in 2015 is sharing similar comments. The phrase that seems to be looming over Gronk like the halo on an angel is ‘the door is open’.

NFL veteran defensive back Logan Ryan is under a 1-year, $1.12 million contract with the Tampa Bay Buccaneers. He sat for a Friday morning interwith with Good Morning Football on the NFL Network and had this to say:

“I wouldn’t close the door, but I definitely think that he’s at peace with his career. He’s a Hall of Famer and arguably the greatest tight end of all time. I’ve been with him, I’ve seen what he’s played through and his body has been beat up through the years. He definitely leaves it all out there. So, I’m not one to speak on it because I put a long soliloquy of a tweet out — all 140 characters — when Tom retired. And then he unretired on me. So, I didn’t put a long tweet out for Gronk.

You never know, players are taking ownership nowadays and reporting their own news. They’re taking breaks, they’re taking hiatuses and coming back to the sport. And you’re allowed to do that. Either way, I’m proud of Gronk. I’m happy for Gronk. He’s definitely the greatest tight end that I’ve ever played with.” (h/t PFT)

Logan Ryan on @gmfb said he wouldn't "close the door" on Gronk returning to the #bucs at some point. Ryan told us that he wrote a long tweet about Tom Brady when he retired, he hasn't and won't write one for Gronk just yet.

Please, for the love of God close the door. I’m beginning to think Gronk is suffering from low self-esteem and needs validation from sports writers through attention.

Gronk himself said he’s not coming back. Not even if Tom Brady got on his knees and begged to the good lord. Dude has a mountain of injuries and I’m sure he’s ready to move on from that. https://t.co/xXfqIjHYOl

I’m a born and raised Tampa Bay Buccaneers fan. Like everyone in Bucs Nation, I’d love to see Rob Gronkowski come back for one more season but with every passing day it seems less likely. It wouldn’t be at all shocking if Gronk waits until mid-season to come back with his body in impeccable shape and his spirits riding high.

He doesn’t need training camp, he doesn’t need the pre-season. Heck, Gronk doesn’t really need the regular season. Gronkowski could show up in the NFL Playoffs and play at an elite level… We can hope…