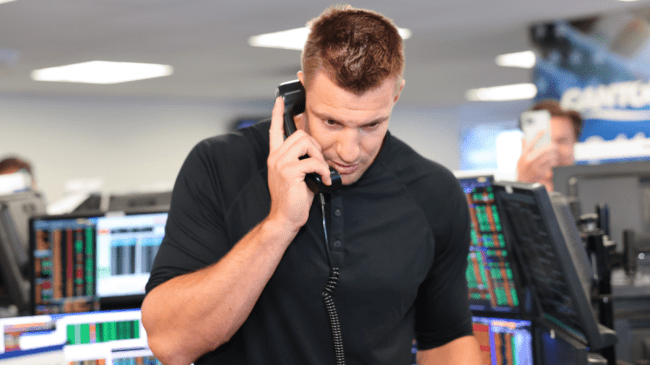 Many immediately jumped to conclusions, predicting that it was time for him to make his return to the football field just before the playoffs begin. Those folks were well off, though, as he keyed followers in on his actual plan.

Gronk is joining the FanDuel team, tweeting out a hilarious video clip to note the signing. That news apparently let some NFL teams down as they’d hoped to have a shot at landing the retired free agent. He revealed that he has no intention of coming back to the league, but that doesn’t mean there wasn’t any interest.

While talking with Kay Adams on the Up and Adams Show, Rob Gronkowski said that a pair of NFL suitors came calling following his original “I’m bored” tweet. Here’s what he had to say in the interview.

“Since the tweet, two teams reached out. It was unbelievable. I won’t say who, but yeah, there were two teams. It was pretty nuts to me that everyone actually saw the tweet. It shows how far social media can go… I barely tweet, actually. I just tweet once in a while. But ‘I’m kinda bored?’ People took that as I was coming back to football.”

While he wouldn’t name the teams, Gronk would go on to say that his agent also called him, and that he wanted shop him around to all 32 franchises.

“My agent called me… Just put it this way, Drew [Rosenhaus] wanted to call every team.”

Host Kay Adams pried, trying her best to get Gronkowski to tell her which teams reached out, but Rob stayed closed lipped on the subject.

Kay Adams: “So were the two teams that called teams that you used to play for?”

Rob Gronkowski: “My lips are sealed.”

Gronk’s not coming back to the NFL, but it’s not for a lack of interest.