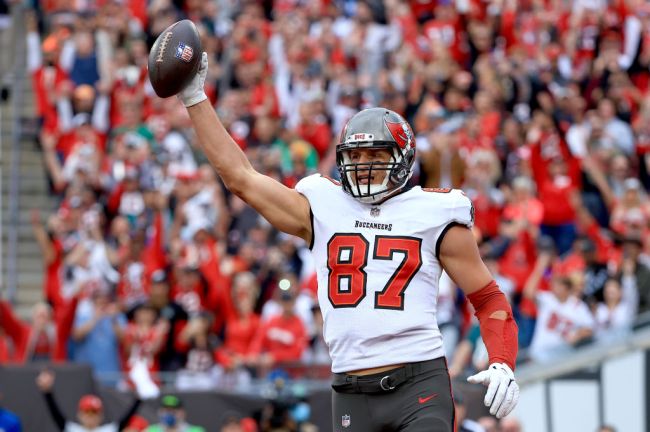 Rob Gronkowski made an appearance on Jimmy Kimmel Live last night and talked about all things Tampa Bay Buccaneers. Among other things, he discussed how long he thinks Tom Brady will continue to play football and even seemingly took a shot at the team where he began playing with Brady.

The topic of player bonuses and the bonuses Gronk earned with the Bucs last season was brought up and while talking about his situation this past season, he made reference to the way New England Patriots handle players who are close to bonuses at the end of the season.

.@RobGronkowski was on Jimmy Kimmel and appeared to take a shot at the #Patriots and how they handle players bonuses compared to the #Bucs

"Not with the Patriots, though. They'll probably pull you before you hit that bonus there…"pic.twitter.com/12K24lhmQZ

The reason this came up is because Gronk actually found himself in a situation this season where some bonus money was in play during the Buccaneers’ last game.

He entered week 18 needing just 65 yards to earn a $500,000 bonus and 7 catches to earn another $500,000. Late in the game, the Bucs led by 14 and Gronk had already reached his yardage bonus. However, he still needed one catch to earn his bonus for receptions.

With 6:29 left in the game, a strong lead, and very little actually at stake for the Bucs, it seemed unlikely Gronk would even see the field again. However, the Bucs let him play and even let Tom Brady stay in the game to make sure he got that catch. Gronk would wind up making the catch to secure his bonus.

It looks like playing for the Tampa Bay Buccaneers made Rob Gronkowski $1 million richer this season.