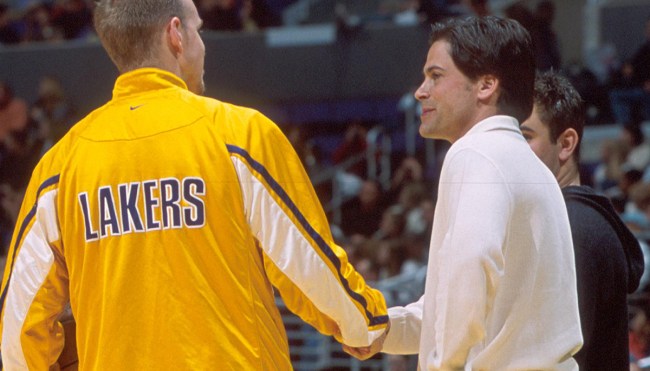 The Last Dance was absolutely overflowing with memorable stories about Michael Jordan’s time playing with the Chicago Bulls, including the pretty wild (albeit fairly unsurprising) anecdote about the time the NBA legend was exposed to what was dubbed the “traveling cocaine circus” inside a teammate’s hotel room during his rookie year.

When you consider the ringmasters of the circus were a bunch of rich professional athletes who played in the 1980s, it wasn’t exactly the most shocking revelation in the world, and the Bulls were far from the only team that dabbled in similar shenanigans at the time.

It should come as no surprise that plenty of members of the Los Angeles Lakers also partook in similar recreational activities, as the team played in one of America’s biggest party capitals and was surrounded by celebrities with similar predilections.

That included Rob Lowe, who apparently traveled along with Los Angeles sideline staple Jack Nicholson during some road trips during the decade. During a recent chat with Jimmy Kimmel, the actor revealed the duo had a habit of flying on the team’s plane and staying at their hotel until he was banned from doing so by Pat Riley for a pretty understandable reason.

During the segment in question (which kicks off at around the 5:35 mark), Lowe revealed how he drew the coach’s ire when the Lakers faced off against the Pistons in the NBA Finals in 1998, saying:

“Pat Riley ended up barring me from going on the team plane and really barred me from staying in the team hotel…What a badge of honor to be banned by Pat Riley, right?

It might’ve been [because] I gave a player who shall go nameless a quaalude and they went on a shooting slump.”

Lowe attempted to cover his tracks in the hopes of not revealing the player in question, and while there’s no stat line that’s identical to either of the cold streaks he mentioned, it’s worth noting Michael Cooper shot .205 from the field during that series (he only made 9 of the 44 field goals he attempted), which makes him the most likely candidate.