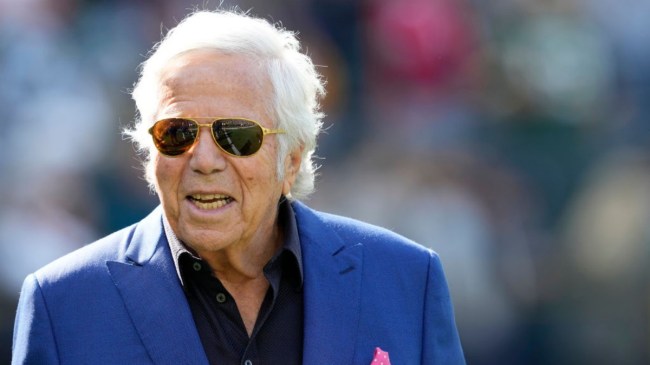 It seems we have a quarterback controversy brewing in New England. No, the New England Patriots aren’t considering replacing Mac Jones. However, there does seem to be some disagreement over who should be their starter when Jones isn’t available.

On Sunday, the Patriots were without Jones for their trip to Green Bay and they decided to start Brian Hoyer in his absence.

Now, it’s being reported that this was a decision that Robert Kraft didn’t agree with. According to Bill Simmons, Kraft would have preferred to see Bailey Zappe get the start.

One thing I heard — as you know, I have some Pats birdies — Kraft loves Zappe. And Kraft thought he should’ve started this week over Hoyer. He’s, like, all-in on Zappe.

It’s not hard to see why Kraft would have preferred for Zappe to get the start for the Patriots this weekend. Brian Hoyer has a clear experience edge over Zappe, but he also hasn’t proven that he can win a football game anymore.

Hoyer’s last win as a starting quarterback came in 2016. Since that win, he has lost 18 consecutive starts.

Meanwhile, Zappe is coming off of a record-breaking college football season where he threw for 5967 yards and 62 touchdowns. Those two numbers broke the records that Joe Burrow set in his last college season, which made him the top pick in the NFL Draft.

Zappe might not ever be Joe Burrow, but there was probably more value in getting your first look at him in an NFL game than there was in starting Brian Hoyer at Lambeau Field in a game that he probably wasn’t going to win.

This isn’t the first time this season that Kraft has disagreed with a decision from his coaching staff. He also wasn’t happy about Kendrick Bourne’s usage in their Week 1 loss to the Dolphins.

After seeing Zappe play last weekend, maybe the Patriots will be more inclined to start him for the rest of Mac Jones’ absence.