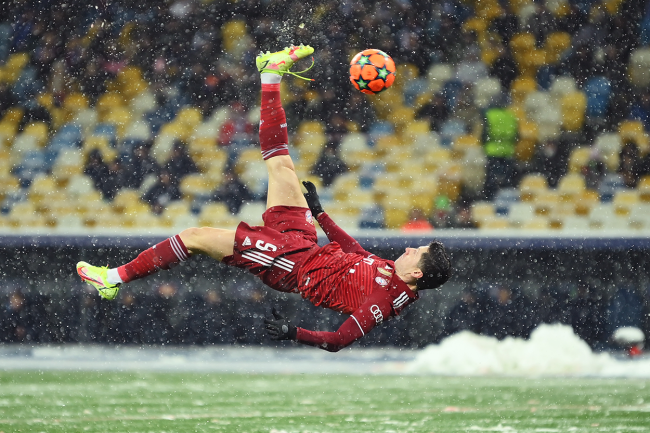 Robert Lewandowski simply cannot stop scoring sensational goals. The Bayern Munich superstar netted an amazing bicycle kick against Dynamo Kyiv on Tuesday— and he did so in the snow, with his shoe untied.

The group stage Champions League match was held at the Olympic National Sports Complex in Kyiv, Ukraine. Temperature at kickoff hovered around 30 degrees (Fahrenheit) and snow was falling at a fairly heavy pace.

As things got underway, Lewandowski was active, like he always is.

When the 14th minute rolled around, the 33-year-old was acutely alert. A ball was played into the box and ricocheted off of a Dynamo defender.

With the ball floating just outside of the goal area, Lewandowski rose off the ground and finished with a bicycle kick into the back of the net. The execution was flawless. Take a look:

To make his extraordinary effort even that much more impressive, Lewandowski’s cleat was completely untied. It wasn’t partially untied or coming loose— the laces were not strung together at all whatsoever.

Lewandowski, who is one of the frontrunners for the Ballon D’Or, scored 48 goals in 40 appearances last campaign and 24 in 18 thus far this season. He is arguably the greatest center-forward of his generation and continues to prove why.

Despite his incredible form in 2021, he is expected to miss out on the award. Lionel Messi is expected to hold the trophy aloft for a record seventh time.

However, if he keeps scoring goals like his bike finish on Tuesday, it is hard to imagine anyone triumphing Bayern’s main man. It gets harder with each passing week to make the case that he is not the best player in the world right now.