Rocco Mediate Shares Story About Calling The Devil As Backup To Try And Beat Tiger Woods At The 2008 U.S. Open 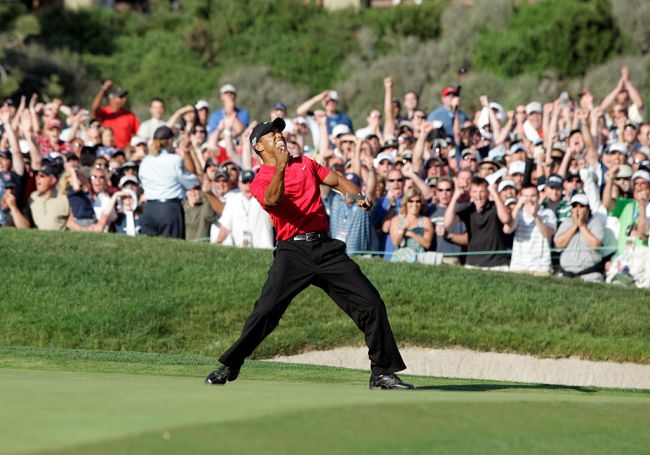 HBO’s latest documentary called ‘Tiger’, which takes an in-depth look at Tiger Woods‘ life both on and off the golf course, features plenty of never before seen footage and stories from people in his life, but a story Rocco Mediate told about the night ahead of his battle with Woods at the 2008 U.S. Open stands out.

Woods, who played that week with a broken leg and torn ACL, held a two-shot lead over Mediate heading into the final round on Sunday with Lee Westwood wedged between them on the leaderboard.

Mediate was already in the clubhouse with an even par 71 with Woods in the group behind him one shot back standing on the 18th tee. Woods faced a 12-foot birdie putt on the final hole to force a playoff, and with Mediate watching just after signing his scorecard, Woods sunk the putt to no real surprise. This set up one of the more lopsided playoffs in major championship history, at least on paper, which wasn’t the scenario Mediate wanted to play out heading into the final round on Sunday.

Mediate was 45-years-old, the No. 48 player in the world and had five PGA Tour wins to his name at the time. Woods was only 32-years-old, the No. 1 player in the world, and was a 13-time major winner. Mediate knew that an 18-hole playoff was going to be an uphill battle, even with Woods having to play on just one leg, so he decided to call up the devil as backup ahead of the final round to see if he could win the championship out right.

“I’m thinking, I can’t beat him, I’ve got to have backup, so I call the devil,” Mediate explained during Par 2 of the documentary. “I say devil, listen, I need some help tomorrow, I’ve got to play this guy and he’s just the best. He goes ‘oh yeah, you’re playing Tiger tomorrow, he’s already with me, I’ve had him since he was a kid.’ And I went ‘son of a bitch’ and hung the phone up.”

Ahead of the final round of the ‘08 US Open, Rocco Mediate said he needed backup in order to beat Tiger Woods, so he called the devil.

He said the devil told him “he’s already with me, I’ve had him since he was a kid.” pic.twitter.com/vmkxQ5qlPr

The documentary laid it out as if Mediate made his call to the devil prior to the final round. Perhaps he did this before the playoff the next day, but nevertheless, it’s an eye-opening story, to say the least.

Mediate’s story here is tongue in cheek, but he is a very unique guy so there may be a chance that he really did try to call up the devil for a little extra push to take down Tiger.

Woods went on to beat Mediate in what would be the final 18-hole playoff in U.S. Open history as the USGA changed the format following the event.