Shocking: Roger Goodell Is Attending The NFC Playoff Game Over Getting Verbally Lambasted In New England 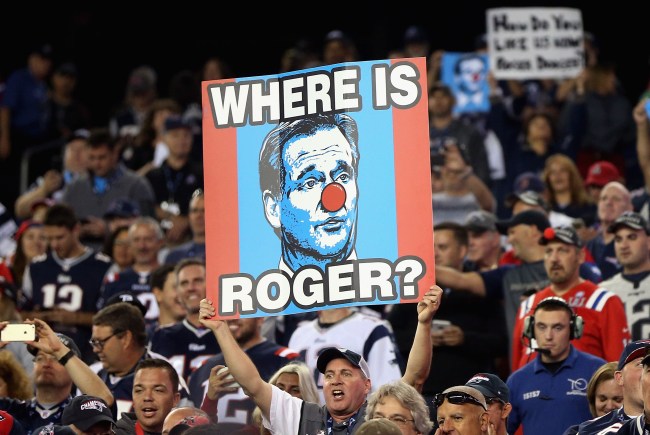 Roger Goodell made his long-awaited return to New England for opening night against the Chiefs (if we’re not counting the preseason game against the Jags). Goodell showed his face to a sparse crowd and hour before the game before making his way up to a suite separate from Robert Kraft’s. The Patriots chose not to show Goodell on the stadium video screen for the entire game. Nonetheless, the reception was expectedly cold. I was there. Lets just say he was not the belle of the ball. Fans took a break from chanting “Where is Roga?” to scattered chants of “Suck my balls, Rogah!”

Just been informed by the league that Commissioner Goodell would be attending the NFC title game in Philadelphia and not coming to Foxboro. He's already been here twice for the Jacksonville preseason game and kickoff game with the Chiefs

Something tells me the reception in Philly won’t be much warmer.

Roger Goodell will be in Philly this weekend for the NFC Championship Game.

As big of a walking boner Roger Goodell is, I find myself feeling bad for the poor bastard at times. He is the Dean Pritchard of the NFL.

And then I remember that the committee of owners signed off on a contract worth $200 million over five years and my sympathy vanishes.