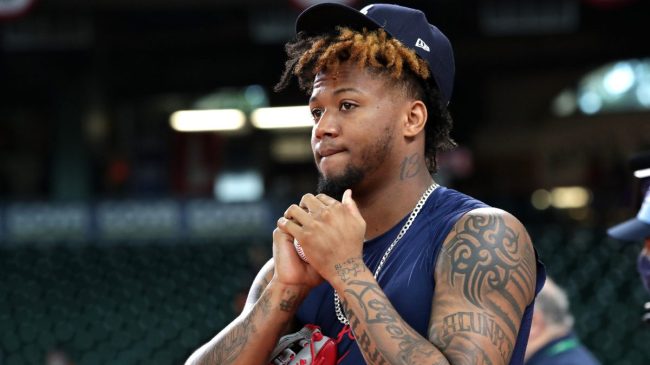 The Atlanta Braves won a World Series in 2021, but they had to do so without the help of one of their top players.

The team suffered a huge blow midway through the year when star outfielder Ronald Acuna went down with an ACL injury. That ligament tear cost him a chunk of his season, and the postseason, as he had to watch his teammates make the playoff run from the dugout.

Prior to his injury, the slugger was hitting .283 with 24 homers and 52 RBIs. He was an All-Star selection and one of the most dangerous hitters in the National League.

His swing appears to be close to what it was last year, judging by his offseason batting practice sessions. Now, he’s just got to get the speed of the game back under his belt before making his return to the majors.

That starts with a stint in the minor leagues.

Acuna is currently playing with the Gwinnett Stripers, and in his most recent performance, he ran into a bit of controversy.

In a third inning at-bat, the outfielder took a pitch with a 3-1 count. It was a borderline pitch, but one that the home plate umpire called strike two.

Acuna apparently disagreed as he was already walking towards first base. He then gives a glare of disgust before returning to the box.

Acuña ain’t letting these minor league umps get away with calls he disagrees with 🤣 pic.twitter.com/304ysjFfjI

The next pitch was an obvious ball, giving Acuna a free base. He sarcastically looks back at the umpire before jogging down to first.

Acuna has never been one to avoid controversy. Earlier this year, he said in an interview that he wasn’t upset in the least to see Freddie Freeman leave the team. He apparently got into “clashes” with the veteran due to his attitude and style of play.

Acuna will always be one to speak his mind. Baseball needs that, and it will be great to get the young superstar back in Atlanta’s outfield in the very near future.