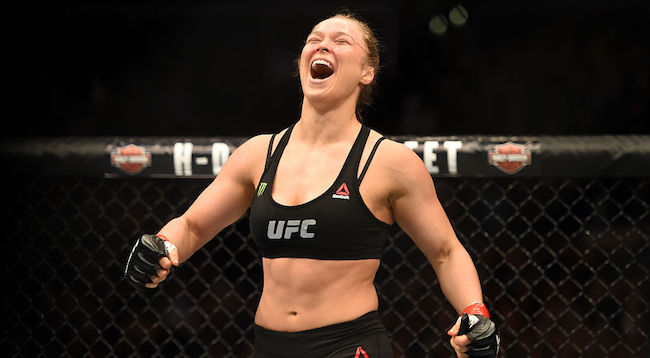 It might be hard to remember now, but there was once a time when Ronda Rousey ruled the world of MMA. She kicked off her career by winning eight consecutive fights via armbar, and the hype around her only began to grow as she continued to dispatch opponent after opponent with ease on her way to a 12-0 record.

Her prowess in the ring eventually led to a fair amount of success outside of it. Rousey was given roles in both The Expendables 3 and the Entourage movie and was even slated to step into the hallowed shoes of Patrick Swayze’s Dalton in a wholly unnecessary remake of the cinematically unparalleled Road House. Her future seemed virtually limitless when she stepped into the ring against Holly Holm— at least until Holm kicked her in the head and sent her crumpling to the canvas.

After the loss, Rousey essentially pulled a Luke Skywalker and put herself into exile until she started making the rounds to promote her fight against Amanda Nunes at UFC 207. She suggested the bout might be one of her last, and it became clear she was probably done in the Octagon after losing by TKO in the first round.

After the fight, plenty of rumors began to swirl about what Rousey would do next, and all signs have pointed to her pivoting to professional wrestling. There was a report a few months ago that she had already started basic training and there are been reports that she may make her debut at Wrestlemania 34 in New Orleans this April.

Now, USA Today reports Rousey is close to pulling a reverse CM Punk and finalizing a deal to join the WWE. No details have been released, it seems like it’s only a matter of time before she steps into the squared circle.

Back in September, Rousey cut a promo with a few WWE superstars that made Lindsay Lohan’s performance in Herbie Fully Loaded look like Oscar-winning material, so let’s just hope her training is focusing on her acting skills as well.