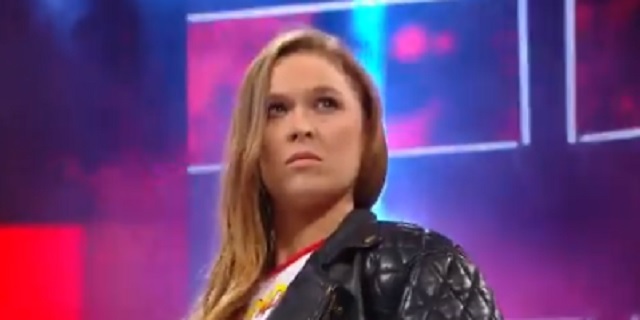 Ronda Rousey is officially a member of the WWE. After week’s of speculation the former MMA star made her debut at tonight’s Royal Rumble and hinted that she was going to wrestle at Wrestlemania.

Everyone's eyes are on #WrestleMania 34…

Ronda spoke to ESPN about her decision to sign with the WWE.

This is my life now. First priority on my timeline for the next several years. This is not a smash-and-grab; this is not a publicity stunt,” Rousey told ESPN’s Ramona Shelburne of her decision to join WWE. “When I first met with Triple H, I told him, ‘There are other things I can do with my time that’ll make way more money, but I won’t enjoy nearly as much.’

“It’s funny — it’s kind of like acting, in that it was something I always wanted to do but I never thought was in the cards for me,” Rousey told ESPN of wanting to wrestle professionally. “And now that I realize I really do have this opportunity, I feel like my 6-year-old self would totally kick my ass if I didn’t take it.”

Getting paid millions of dollars to fake wrestle and act sure does beat getting kicked in the face and getting your ass kicked for a living.