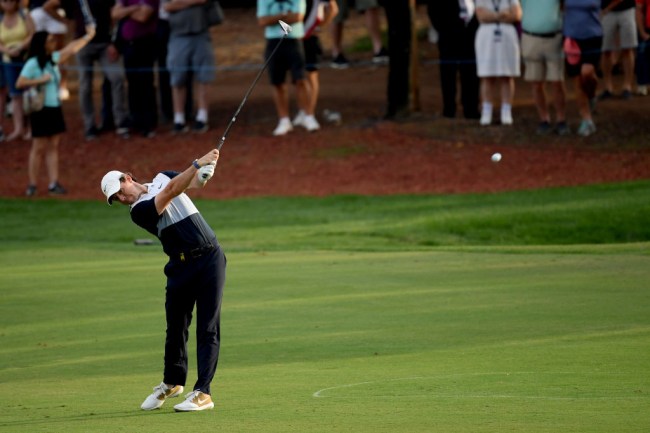 It’s been a great year for Rory McIlroy. The 30-year-old has found the winner’s circle four times in 2019 including wins at both The Players and Tour Championship en route to being named the PGA Tour Player Of The Year for the third time in his career.

It’s obvious that the No. 2 player in the world hits great shots week after week and with that it’s usually difficult to pick out just one shot of the year that stands out above the rest. In McIlroy’s case, however, there is a clear-cut favorite and it just so happened to come at this week’s DP World Tour Championship.

Not to sound too cheesy, but if the highlight itself is a piece of art, the way McIlroy described the shot is most definitely poetry.

To set the scene, McIlroy had a 3-wood in hand with 291 yards to the flag on the final hole on day one. The insight into McIlroy’s thought process comes via GOLF.

“I had 270 — equivalent 272 — to the front, 291 to the pin, sort of back in off the left. Wind was off the left, so it was a nice one for me to just aim straight at the pin and know if I hit my little draw it should hold but if it gets going on the wind, obviously the bunker on the right is better than the water on the left. I just flushed it.

When I was over it, it was sort of enough left, and I sort of carry my 3-wood off the deck about 280, so it was right on the limit but as soon as I hit it, I knew it was perfect. It was right out of the middle.

“I’m looking forward to seeing it on TV later, to be fair. It was one of those where if you get it right and you button it, it’s going to be perfect. But it was more, I think if the wind had been off the right instead of off the left, I don’t know if I had of went for it because I hit a little draw, and the wind is going to hold that up. It was a left-to-right wind.

So I knew the water wasn’t really in play. Worst-case scenario it might go in the bunker on the right and that’s not a bad leave. There’s so much more that goes into these shots than just stepping up and hitting it.”

Pretty pleased with the way I finished the round today😉 #dptwc pic.twitter.com/cU1kYZtJHt

It’s always great when a professional golfer, let alone a player like McIlroy, let’s us into their thought process during a high-pressure, precise shot.

McIlroy has always been fantastic about being thoughtful with the media and given real, descriptive answers on things that spike his interest.

It probably wasn’t too hard for McIlroy to go into detail about that particular shot though. After all, if were you and me that pulled off that kind of approach shot we’d be telling people about it until the day we die.