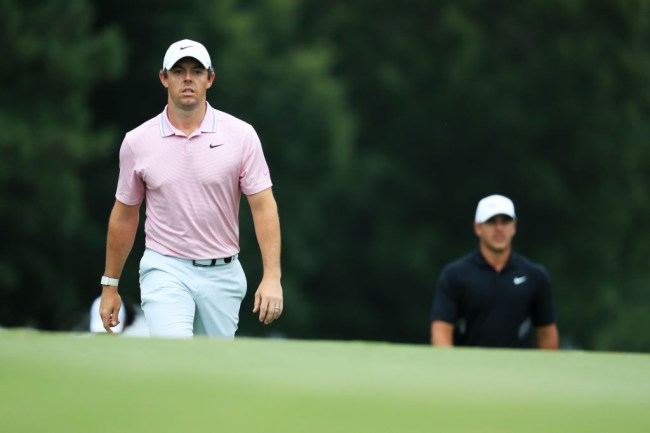 Rory McIlroy was named the 2019 PGA Tour Player of the Year on Wednesday and for most folks out there it came as a shock and when you break the numbers down, it certainly looks like an upset win for the Northern Irishman.

There was no arguing that the Jack Nicklaus Trophy was going to be awarded to either Brooks Koepka or McIlroy. Sure, Matt Kuchar and Xander Schauffele were in the running to win the player-voted award, but it was a two-man race, period.

The biggest knock on McIlroy is that he didn’t win a major this year and even missed the cut at The Open. With all of that being said, he still had one hell of a year with 14 Top 10 finishes in 19 starts which included a win at The Players, the RBC Canadian Open, three Top 10’s in WGC events and a four-shot win at the Tour Championship to close out the year making him the FedEx Cup champion.

Rory McIlroy caps off an insanely impressive year with a win at the Tour Championship earning a cool $15 million.

-Three wins including The Players
-Top 10 finishes in 74% of his 19 starts
-Two Top 8 finishes in majors
-Just under $23 million earned pic.twitter.com/aS2TFwiyNu

Koepka’s resume for the year was built around his performances in majors. He had nine Top 10’s in 21 events which included runner up finishes at both the Masters and U.S. Open, a win at the PGA Championship plus a T-4 finish at The Open. He also won the WGC in Memphis beating McIlroy by six shots back in June and won The CJ Cup At Nine Bridges.

Both McIlroy and Koepka carded three wins on the year, but McIlroy’s best finish at a major was T-8 at the PGA Championship.

Let’s just say the fine folks on Twitter thought the man with a major win and insanely impressive year in the year’s biggest event was more deserving of the award.

Rory McIlroy wins PGA Tour Player of the Year. Nothing against Rory BUT no Brooks Koepka?? Top five in ALL four Majors?

Not McIlroy's fault, of course, and he did enjoy a fine 2019. But it is ridiculous that the PGA Tour players voted for @McIlroyRory over @BKoepka as their Player of the Year. McIlroy would swap his season with Koepka's in a heartbeat. Shouldn't be a popularity contest

There better be paper ballots because I want a recount. https://t.co/oglrMoztpt

PGA Tour doesn't disclose vote totals on player of the year, which is weird. Rory says he asked for the final tally, too. "They're keeping a tight lip on it." Not to suggest vote totals fall under category of conduct unbecoming …

Rory beating @BKoepka for @PGATOUR player of the year is such recency bias bullshit. Only majors matter and Rory won zero.

It is the third time McIlroy has been named PGA Tour Player of the Year, but it’s the first time since 1991 that the PGA POY award and PGA America POY award has gone to two different golfers as Koepka took home that honor.