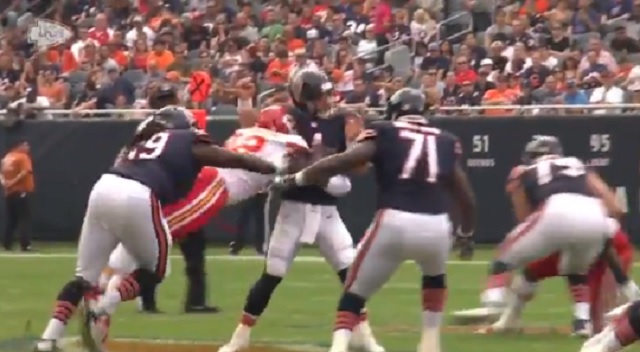 This offseason the NFL implemented several new rules to prevent injuries and to make the game safer.

One of the new rules implemented dubbed the “Aaron Rodgers Rule,” because it was put into place to prevent the injury that occurred when Anthony Barr drove into the Packers QB after a tackle last season has angered plenty of NFL fans this offseason.

During today’s Chiefs-Bears preseason game, Chiefs pass rusher Tanoh Kpassagnon sacked Bears quarterback Chase Daniels with a perferct form tackle but was flagged for roughing the passer because refs apparently believed Kpassagnon landed on Daniel with the weight of his body.

This was called a penalty, roughing the passer.

This of course pissed off NFL fans who reacted on Twitter with several angry tweets directed at the NFL.

The fact that this was called a penalty is a travesty. Tremendous rush, lowers the shoulder to get the edge and explodes towards the QB. No idea what you want him to do there. pic.twitter.com/fHuEUwprca

We are witnessing the death of football as we know it. Little by little this game will turn into two hand touch.

This beautiful sack by #Chiefs OLB Tanoh Kpassagnon cost his team 15 yards now and will probably later cost him $20,000 pic.twitter.com/OZyhPQoDAl

@NFL these new rules are making the game hard to watch. Sacks with perfect form being called roughing the passer?! The helmet rule is suppose to go both ways but only gets called on the defender who has to adjust to a moving target as the offesn lowers their head.

Man that roughing the passer call..idk about that looked like a routine sack..the league office has to figure this out or it is gonna be a long season.