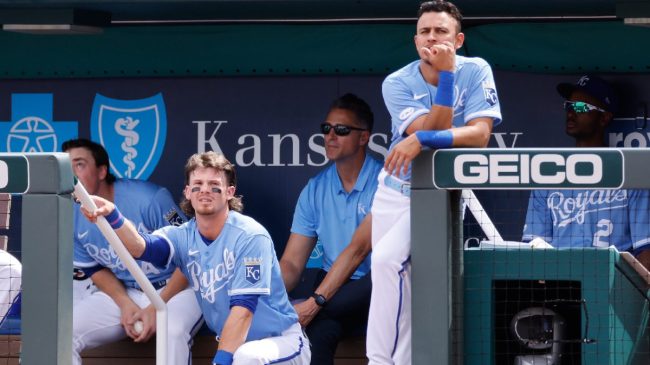 The Royals-Guardians series has been highly entertaining this weekend, both on and off the field, with the two clubs’ social media teams providing viewers with a few laughs.

On Opening Day, Cleveland responded to a loss which quickly ruined their hopes for a perfect season. On Sunday, it was Kansas City’s turn.

The Royals were absolutely crushed by the Guardians on Sunday afternoon, landing their first defeat of the season.

The first two games of the series saw some fantastic Kansas City pitching. Over the first 18 innings of play, the Royals surrendered just a single run to land a pair of close victories.

That was far from the case in game three, though.

Cleveland jumped out to a 10-0 lead through two innings on their way to 17-3 blowout win. The Guardians racked up 22 hits on Sunday, which nearly doubled their output over the first two matchups.

All but one starter in the lineup recorded a hit, with seven hitters tallying multi-hit performances. That was headlined by rookie Steven Kwan who went 5-for-5 and scored four different times.

It was smooth sailing for Cleveland from the start. When the game ended, the Royals’ social media team gave a hilarious score update to its followers.

They certainly weren’t lying. There’s not much to say when your pitching staff gives up 17 runs.

Still, fans took note of the sense of humor, and they were quick to give their reactions.

Now this is how a pro team account should handle tweets. https://t.co/QtelRt0ykP

At least they have a good sense of humor about it 🤣 #TogetherRoyal https://t.co/GR8sjiBiLc

Way too early favorite for tweet of the baseball season. https://t.co/9U5MWmLRlv

Kansas City will look to right the ship on Monday as they close out this four-game set with the Guardians. Despite the blowout loss, the Royals can take the series with one more win.