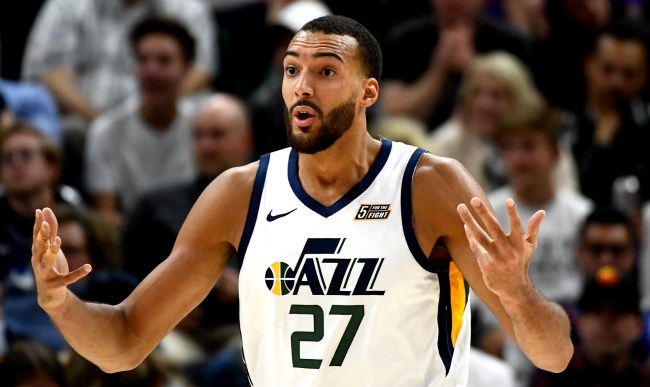 Five months ago Utah Jazz center Rudy Gobert did a very dumb thing when he went around mocking the coronavirus by touching every mic in the media room and running around touching other players and their belongings in the locker room.

Within just a few hours of Gobert doing this the entire NBA season came to a screeching halt as he and his teammate Donovan Mitchell were both diagnosed as being infected.

Gobert later apologized for his stupid behavior and even made a hefty charitable donation, but his teammates and fans of the NBA were still not happy with him for what he had done.

Of course, Gobert isn’t the sole reason the NBA season was halted and players came down with the virus, it was bound to happen sooner or later as we now know, but as far as many NBA fans and players are concerned Gobert is still the face of the league’s shutdown and this is not sitting well with Gobert.

“The media portrayed it like I caused the NBA to shut down,” Gobert told the Washington Post. “Instead of saying that it’s a pandemic and Rudy Gobert tested positive. For a lot of people who don’t think further than what’s put in their faces, they really thought I brought the coronavirus to the United States.”

Gobert acknowledged that the video made him look like “someone who doesn’t care about other people’s safety or lives.” He moved quickly to make amends in March, issuing an apology, filming a public service announcement and donating $500,000 to support coronavirus efforts in Utah, Oklahoma and his home country of France.

“It was hard for me to see so many people question my character based on one video,” Gobert said. “That was a big learning experience. I know who I am. People around me know who I am. Everyone is going to have a different perception and opinion of you. If I start putting my energy into that, I’m going to be living a very painful life.”

Gobert also addressed how his relationship with Donovan Mitchell changed after he too tested positive and had to be in quarantine for 14 days.

“When everything happened, [Mitchell] was frustrated,” said Gobert. “I was frustrated. I really wanted to make sure that he was fine. It wasn’t really about going into a conflict or arguing. [After time passed], I was able to call him and tell him what was on my mind, and he did the same. I think that’s what men should do. Don’t put the business out there in the media. People were seeing this as something that could destroy the group. I see it as something that could make the group even stronger. If you’re able to come back from that, we won’t be worried about a team beating us or a bad defensive quarter. It gives perspective.”

Gobert says he still hasn’t recovered his sense of smell, but other than that he’s doing well. He just hopes that going forward people, including the media, are a little less quick to pile on when a player makes a mistake.

“We all have the tendency to judge people without knowing them,” said Gobert. “You watch us play basketball every day, but you don’t know who we are, what we’ve been through, what we’re going through. Get to know people. Go deeper. You can spread a lot of positive messages [on social media], but you can also spread hate and judgment. You’ve got a choice.”