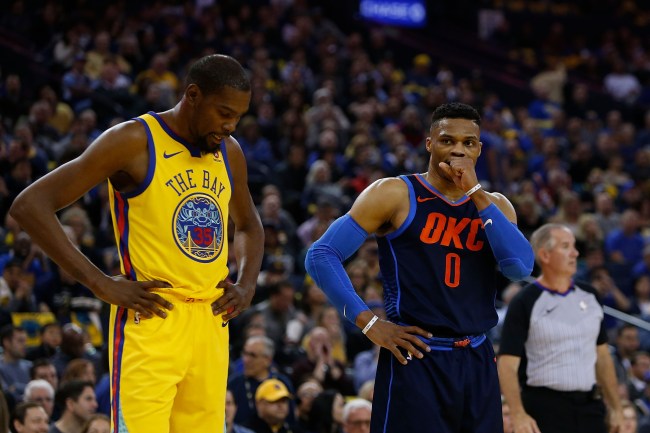 Russell Westbrook is one of the most aggro MFers on the planet, playing with a constant chip on his shoulder and going 150 miles per hour every single time he’s on the basketball court. It’s one of the reasons he’s so dope to watch on the court, because he never takes a play off and has a “me versus the world” mentality — which really works well for him.

While Russ uses that mantra every time he’s on the basketball court, one guy that he’s always been rumored to be beefing with is former OKC Thunder teammate Kevin Durant, who famously left Westbrook and the Thunder in the summer of 2016 to join a Golden State Warriors team that just won 73 games and lost in the NBA Finals. We know what’s happened since: Durant’s won back-to-back title and Finals MVPs.

As much as fans and the media want to pit Russell Westbrook and Kevin Durant against one another — which, c’mon, there was clearly some dislike between the two — the former league MVP and triple-double machine, Westbrook, made sure to set the story straight on Kevin Hart’s hilarious web series, “Cold As Balls”.

When asked if there’s any hate towards Durant, Russell Westbrook took the chance to clear the air a bit, telling Hart there wasn’t anything like that at all.

“Hate? No,'” Westbrook said when explaining the past tension between KD and himself. “Anything between me and Kevin they want to put ‘hate’ because they want a story. They want to talk about something. They want something the fans can hold on to. But it’s not ‘hate.'”

It’s kind of cool to hear Westbrook take the high road here — something he didn’t so in the past when it came to Durant. Remember, this is the same dude who trolled KD by showing up wearing an outfit a couple years ago mocking Durant’s love of photography, so there has definitely been some friction between the two.

But Kevin Hart didn’t just want to know about Russell Westbrook’s thoughts on Durant, so the comedian/actor asked if he ever thinks about what might have been had he, Durant and another league MVP, James Harden, had stayed together on the Thunder, as well as what Westbrook’s thoughts are on the whole superteam trend in the NBA. His response was classic Russ, delivering a reply in his usual confident, matter-of-fact tone.

“We made it to the Finals when we were 23. I definitely know if we could’ve stayed together we would’ve been a problem for sure,” Russ said. “We’ve talked about it a couple years after, but never much since. Everyone else has been talking about it ever since.”

“Me personally, it’s not my style. I like to compete. I like to go against the best. That’s why I’ve always stayed in Oklahoma City,” Russ said before answering the question of if his team needs another player to compete with super teams like the Golden State Warriors. “No, we’ll kick they ass with the team we have right now, how about that?”

To see the full video of Russell Westbrook’s time with Kevin Hart on “Cold As Balls,” take a look below.

Regardless of how you feel about Russell Westbrook as a player, the dude is always entertaining, no matter if he’s ballin’ out, rocking some absurd style or talking sh*t to other players through the media. Keep in being you, Brodie, because it’s awesome.