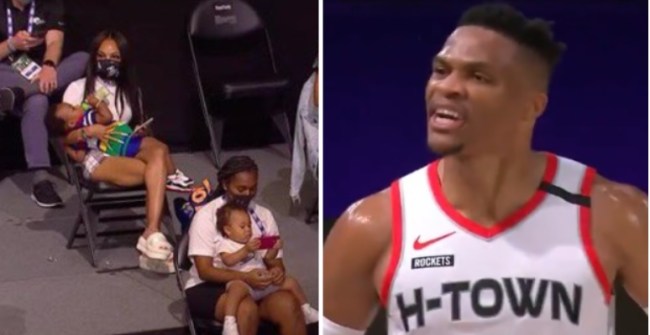 Russell Westbrook is not one to hide his emotions and things got a bit awkward when he was a little too raw with player’s families in attendance.

During game 1 of the Lakers-Rockets series, a hyped-up Westbrook yelled “Fuck they talking about” after hitting a three-pointer in the fourth quarter over Anthony Davis.

Westbrook cursing up a storm inside the arena is funny because it’s mostly empty except for player’s wives and babies who were in attendance on the sidelines.

the best part about this is Russ is screaming those obscenities directly at the players’ families and children in a dead quiet gym. no-one is safe. pic.twitter.com/SK3uFoZIJn

imagining a similar audience just trying to mind their own business watching baby shark get interrupted by a colossal "BITCH ASS" makes me squawk. pic.twitter.com/3Q9p52feRf

The Internet had jokes about Westbrook’s outburst in front of players’ families.

The parents in the family section when Westbrook started screaming pic.twitter.com/OIjr9hnl31

Westbrook at the babies: pic.twitter.com/aGfCsXrvIq

The babies in the crowd: pic.twitter.com/Fwu1Gm6kJk