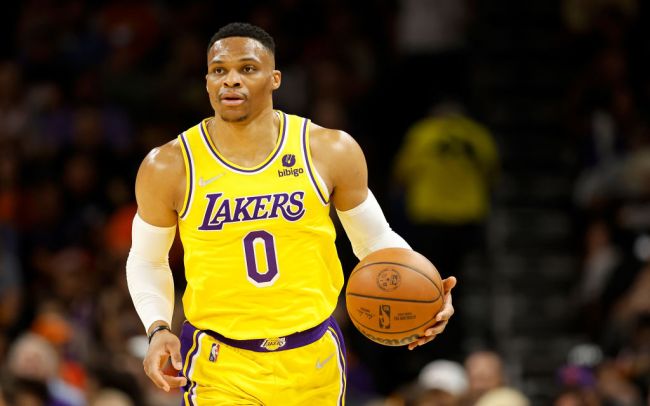 This season was a massive disappointment for the Los Angeles Lakers as they failed to make the playoffs for the second time since acquiring LeBron James. The failure came despite adding Russell Westbrook to a roster that already had LeBron and Anthony Davis. Since the season ended, many fans have been expecting Westbrook to moved in the offseason.

Now it seems like that is something he would very much be in favor of. Today, a fan noticed that Westbrook had removed all pictures involving the Lakers from his Instagram.

Russ has deleted all his photos with the Lakers. 😟 pic.twitter.com/4PBkFEvK3T

Westbrook actually deleted every team he has ever played for except for one when he cleared out his Instagram. That one remaining team is the one he started his career with, the Oklahoma City Thunder.

The Thunder could find a way to fit Westbrook’s salary for a year if it means acquiring another draft pick to add to the massive collection of them that they’ve already accrued. That’s really the only thing that would make acquiring Westbrook make sense for the Thunder.

They don’t really need him with Shai Gilgeous-Alexander already on the roster and they won’t exactly be looking for veteran players to push them into contention after winning 24 games this season.

However, it would be something fun for fans to see one of the team’s former stars return. It would really just come down to whether or not the Thunder could get a pick from the Lakers that makes the move worth it. The Lakers reportedly are trying to do whatever they can to avoid trading a 1st rounder to get rid of Westbrook, but they need to find a trade partner for him.

It seems like Westbrook is as ready to move on as the Lakers are, so now it’s just matter of finding the best move possible for both sides.