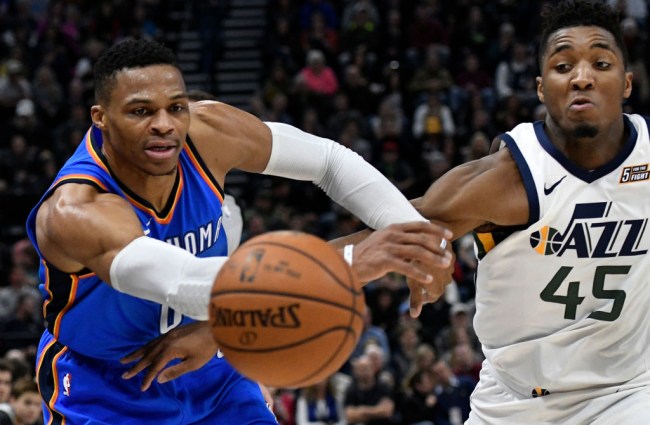 Being able to play a professional sport is as much mental as it is physical, and if you want to compete at the highest level of whatever game you’re playing, you have to figure out a way to prevent people from getting into your head.

Plenty of athletes have made a name for themselves thanks to their impressive ability to play mind games with their opponents—like Kevin Garnett, who had a tendency to take things slightly too far by doing things like bringing up Tim Duncan’s dead mom and comparing Charlie Villanueva to a cancer patient.

There are also plenty of fans who are more than happy to get in on the trash-talking action, and while most players tend to ignore them (or occasionally clap back), every once in a while they manage to make an athlete reach their breaking point.

This was the case in Utah last March when Russell Westbrook got into a verbal altercation with a fan and threatened to go after him and his wife after the guy in question told him to get down on his knees, which I assume was not a reference to praying.

Russell Westbrook made a statement and did not take questions tonight. Here’s all of the statement I can fit into one Twitter vid: pic.twitter.com/EQA3A4jaQQ

Following the contest, the fan—who was identified as Shane Keisel—said Westbrook overreacted and that he thought his comment was fairly innocuous.

Shane Keisel, the Jazz fan who was involved in a verbal altercation with Russell Westbrook during the Jazz loss to the Thunder, explains his side of what happened. @KSL5TV @kslsports #nba pic.twitter.com/ScCSRttTCg

However, it appears the Jazz didn’t see it that way, as they eventually hit Keisel with a lifetime ban (likely for having the audacity to make a reference to oral sex within the borders of Utah).

Now, according to ESPN, Keisel has weighed all of his options and decided the best course of action is to file a $100 million lawsuit against Westbrook and the Jazz on the grounds of “defamation and emotional distress,” claiming he was singled out and that other fans in the vicinity were engaging in similar behavior.

Westbrook doesn’t seem to be taking the accusations too seriously, and when you consider the sum Keisel is in search of, it’s kind of hard to take him seriously as well.