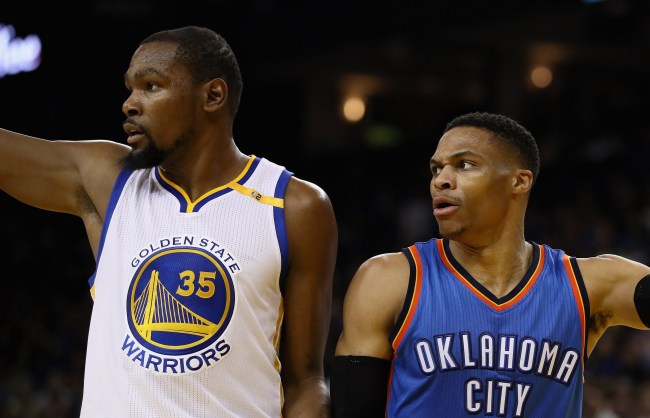 Russell Westbrook just signed a five-year, $205 million extension with the Thunder, the richest contract in NBA history. The 28-year-old reigning MVP is now the highest paid player in the NBA, pulling in a sultry $38.3 million a season. For those of you who are looking to feel bad about your current salary, Russ’ contract equates to $569,512 (pre-taxes) per game in the last year of his new deal. Holy hell.

Who would have ever thought that the player who signed the largest contract in NBA history is on the same team as Carmelo Anthony? God damn you 2017, what surprises are you going to throw my way next?

Oh ya, and Westbrook signed the record-breaking contract on Kevin Durant’s 29th birthday. Coincidence? I THINK NOT! But even if it is, you think Twitter is going to take the high road. LOLZ….

Russell Westbrook signed the biggest total contract in NBA history on the birthday of Kevin Durant. That's such a petty move and I love him.

Just mentioning for no reason at all not related to anything in the world at all… today is Kevin Durant's birthday.

I really hope this was on purpose, and if it wasn't, please no one tell me https://t.co/L2bjtQcZxU

Russell Westbrook and the Thunder have agreed to a 5-year $205M extension.

Russell Westbrook committed to OKC with the richest contract ever on KD's birthday. pic.twitter.com/jvS20Fe6RD

$233M: What Russell Westbrook is owed over the next six seasons.

This season is going to be electric.