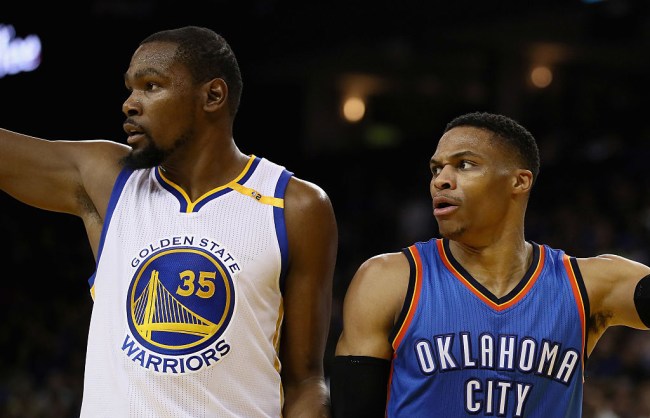 It seems like Russell Westbrook isn’t over Kevin Durant leaving OKC to go win championships in Golden State. This morning after KD won back-to-back finals MVP after the Warriors crushed the Cavs, Westbrook got on Instagram and posted a series of videos of himself singing along to rap songs. One of the songs was Ice Cube’s famous diss record to his former NWA bandmates “No Vaseline”.

“That’s why I went SOLO.” Is Russell Westbrook calling out KD? 🤯 pic.twitter.com/IkbXhhglDU

Goddamn, I’m glad y’all set it off
Used to be hard, now you’re just wet and soft
First you was down with the AK
And now I see you on a video with Michel’le
Looking like straight Bozos
I saw it coming, that’s why I went solo

The Westbrook-Durant beef seemed like it was over after the two played a few all-star games together and were amicable towards each other on and off the court.

KD may have reignited his beef with Russ after he “accidentally” liked an Instagram post that slams Westbrook for being the “problem” when both players played together in OKC.

Westbrook isn’t beyond subtweeting Durant. We all remember the infamous “cupcake” diss when Durant left OKC to the Warriors.