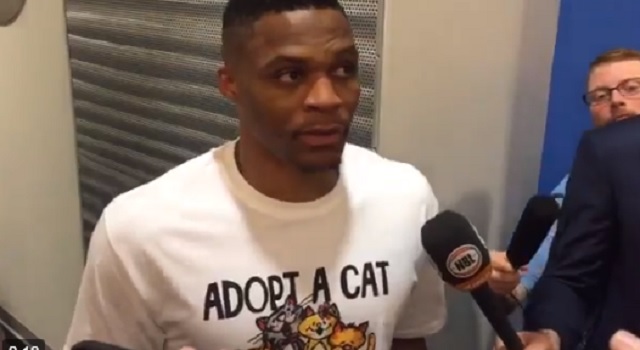 The Russell Westbrook-Kevin Durant feud is still as petty as ever.

A few weeks ago, Durant was arguing with a fan on Twitter and explained that the reason he left the OKC Thunder was because “he couldn’t win with those cats”

On Sunday, Westbrook wore an “adopt a cat” t-shirt while talking to the media after the Thunder’s preseason game and everyone is convinced that it’s a reference to Durant’s tweet.

Russell Westbrook reminding @royceyoung that he went to school: pic.twitter.com/MqIuXatlc9

He is NOW my favorite player in the NBA. 😂 pic.twitter.com/xMHYuyGv0Z

Of course, this isn’t the first time Westbrook has taken an apparent shot at Durant with his clothing. Last season Westbrook wore an “official photographer” vest before last year’s Thunder-Warriors game that poked fun of Durant’s love for photography.

Wait a minute; did this really happen??? 'Official Photographer'? 😆😆😆 Damn Westbrook!!! What a troll!!! pic.twitter.com/4qCK6POa1Z

Westbrook is the king of petty.