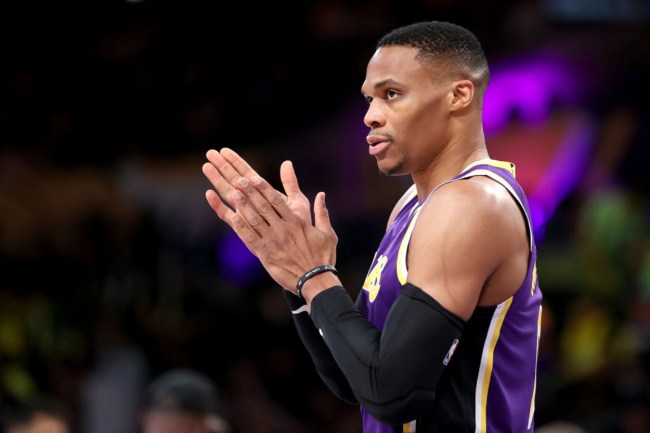 While the Lakers have been hit with the injury and virus bugs this season, it’s safe to say that the big three of LeBron James, Anthony Davis, and Russell Westbrook hasn’t exactly worked out.

Given the fact that the Lakers still have 54 regular-season games left on the schedule, there’s still time to turn things around. According to a new report, however, the Lakers front office may not see it that way.

Bleacher Report’s Jake Fischer reported on Tuesday that the Lakers, who sit at 15-13 on the year, have held internal discussions about possibly dealing Westbrook.

Westbrook is averaging 19.5 points, 8.4 assists, and 7.7 rebounds per night for the Lakers this season. If he were to be traded, it would be his fourth different team in four years.

Interestingly enough, this new report about Westbrook comes just one day after a report from The Athletic’s Shams Charania suggesting Ben Simmons could be interested in joining the Lakers.

Simmons is currently on a five-year, $177 million deal with the 76ers but has no intentions to ever suit up for Philly again as things stand right now.

It’s speculation, as all things are regarding Simmons at this point, but plenty of NBA fans are suggesting some sort of swap deal involving Westbrook and Simmons following the recent developments.

Everyone saw this coming except the Lakers lol https://t.co/b5U8MG8THM

I think Russ is being unfairly scapegoated in Laker land, and he's still a lot better than the overwhelming majority of people seem to think

That being said, keep Russell Westbrook the hell away from my basketball team https://t.co/evcpfyx6fU

it’s almost like anyone with working critical thinking skills knew this wouldn’t work and said that at the time https://t.co/94CIbx77Ht