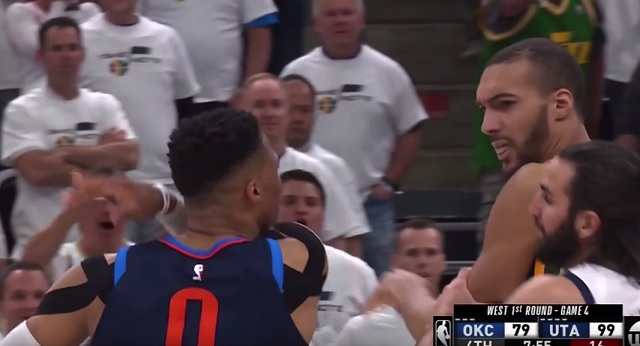 In the fourth quarter of last night’s heated game 4 of the Thunder-Jazz series, Raymond Felton and Rudy Gobert were involved in an on-court altercation. During the altercation, Westbrook who was set to check in the game then proceeded to get into Gobert’s face.

So I went back and checked the OKC feed of the Westbrook-Gobert incident and it's still unclear whether he was checked in or not….Looks like Westbrook made the ref aware that he was coming in and the ref waved him in but ref was still checking out the situation on the court. pic.twitter.com/DRh2eDN8P2

According to Andy Larkin of KSL, the NBA is reviewing whether Westbrook should be suspended for violating their strict rule against players leaving the bench during on-court altercations.

A pool reporter request to the game officials to ask them about the play was initiated, but the NBA indicated that the officials wouldn’t comment on the matter because it would be reviewed by the league’s disciplinary committee.

Update: Upon reviewing the video a few times it’s unclear whether Westbrook was checked in or not. It’s really tough to tell with all the confusion on the court. I don’t think he should be suspended because the lack of clarity from the ref.