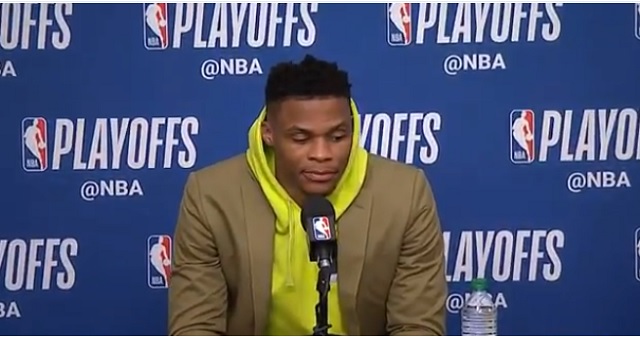 Last night, Ricky Rubio dropped 26 points, 11 rebounds and 10 assists on the Oklahoma City Thunder, and became the first Jazz player to record a triple-double in the playoffs since John Stockton in 2001.

After the game, Rubio talked about how special it is to have his name mentioned next to a legend like Stockton.

“Having my name next to his name is an honor,”. “I don’t know what else to say. It’s huge. Have huge respect for him, and playing here is great because I know how important a point guard he is for this franchise.”

Thunder guard Russell Westbrook was asked about Rubio’s performance and he promised that he was going to allow the Jazz guard to go off again.

Thunder's Russell Westbrook on Ricky Rubio's strong Game 3 performance: "He made some shots. Too comfortable. I'ma shut that s— off next game though. Guarantee that." pic.twitter.com/jHo9cbZt3n

He made some shots,” Westbrook said. “Too comfortable. But I’m gonna shut that shit off next game though. Guarantee that.”

Westbrook better shut down Rubio in game 4 because if he doesn’t the Thunder will be down 3-1 and on the brink of an embarrassinrg first round elimination that could have huge ramifications for longterm ramifications for the team if Paul George decides to leave in the offseason.