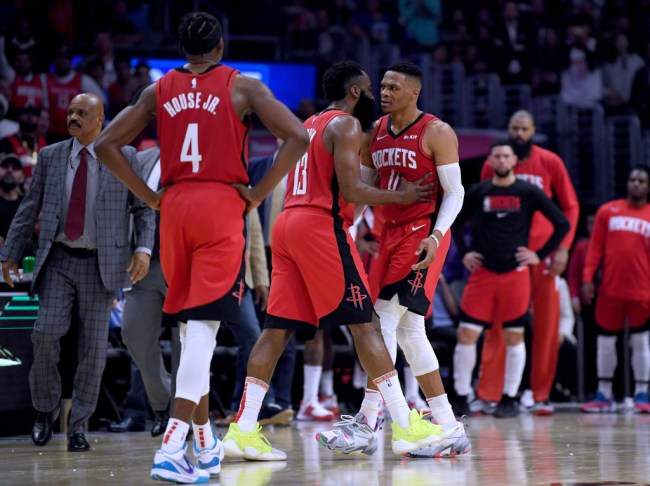 The Patrick Beverley – Russell Westbrook beef goes way back. Pretty much every single time these guys take the court against one another something happens.

You may recall them getting tangled up during a playoff matchup back in 2017 as the two talked all the trash to one another. Then, just a month ago, Westbrook came out and ripped Beverley’s defensive ability after James Harden put up 47 points on him and the Clippers.

Beverley’s defense is really where all of this stems from. Beverley prides himself on playing lockdown, frustrating defense but we didn’t see too much of that on Thursday night when the Rockets and Clippers squared off.

Houston’s two-headed monster finished with a combined 68 points in the win with James Harden scoring 28 and Westbrook dropping 40 of his own. Beverley’s frustrations boiled over late in the fourth quarter after being called for a personal foul, which he didn’t agree with, and was soon hit with a technical foul before being tossed from the game.

Westbrook was, of course, paying close attention to what was going down between Beverley and the officials and decided to hit him with the wave goodbye as he headed toward the tunnel.

Westbrook was given a technical foul for waving him off the court and yelling towards the Los Angeles bench, but he didn’t seem to care too much about it. After the game, reporters asked him whether he regretted doing what he did and receiving the technical foul and he answered with a simple ‘no.’

Westbrook and the Rockets improved to 2-1 against the Clippers with their 122-117 win on Thursday night. Brodie has averaged 26.3 points in the three times these two teams have met up this season.