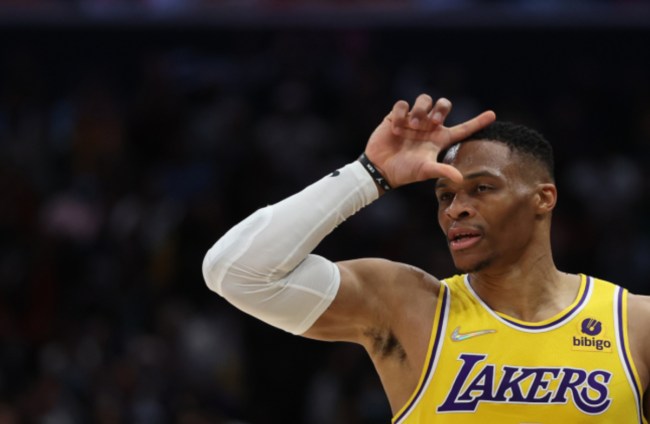 Kendrick Perkins and Russell Westbrook spent a handful of seasons playing together for the Oklahoma City Thunder. The two had a strong friendship together. The keyword there is ‘had.’

Perkins recently joined the ‘Marchand and Ourand‘ podcast and made it clear that his relationship with his former teammate isn’t exactly in the best of spots at the moment. The former NBA big man turned NBA analyst has been critical of Westbrook’s performance with the Lakers this season.

Earlier in the year during an appearance on ‘First Take,’ Perkins said of the big three in Los Angeles, Westbrook would be the one player he would trade away.

“You know, I defended Russell Westbrook for years. And, this year, he struggled,” Perkins explained. “It was a topic that came up on ‘First Take’. They asked me, out of the big three on the Lakers (LeBron James, Anthony Davis and Westbrook), which one would you trade?”

Perkins explained that he wanted to keep things “real” and said he wouldn’t deal Davis or James.

After Perkins made the statement on ‘First Take,’ Westbrook’s wife, Ninan, sent a lengthy text message to his wife explaining that Perkins’ words hurt.

“His wife actually reached out to my wife,” Perkins added. “And with a long text message. It was like, ‘Hey, it hurts me that Kendrick said that Russ needs to be traded. We finally got him back home.’”

Finally getting back home to Los Angeles is cool and all, but the disastrous season Westbrook and the Lakers had is a completely separate topic.

Perkins explained that he sent a message back to Nina, but he hasn’t spoken to her or Russell since.