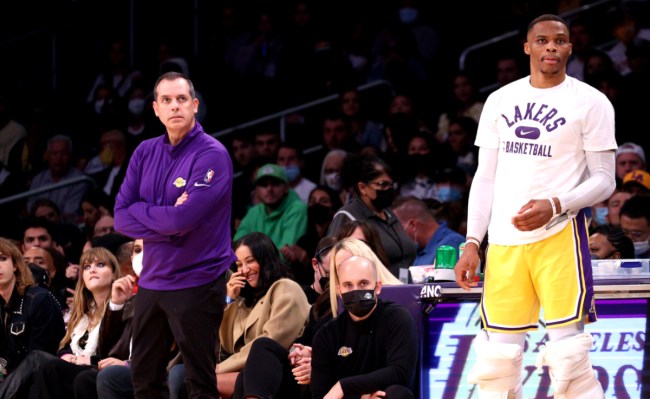 As soon as the Los Angeles Lakers traded for Russell Westbrook, everyone questioned whether or not he would be a good fit alongside LeBron James and Anthony Davis.

Westbrook’s entire game revolves around the ball being in his hands, and if the ball is in his hands that means it’s not in LeBron’s, and that could cause issues.

As we know now, the concerns came to be true, Westbrook was a horrible fit with the Lakers last season and Frank Vogel lost his job because of it.

According to Sam Amick of The Athletic, Vogel was canned by the Lakers partly due to the fact that he couldn’t make the Westbrook experiment work.

When the decision was made to fire Vogel, sources say his handling of Westbrook and the inability to find a way to make him a more productive part of the program were among the factors that played a big part,” Amick reported.

“There was a strong sense that it was on Vogel to make the Westbrook experiment work, and the fact that it didn’t lead to questions about whether Westbrook had been put in a position to succeed.”

If you read that report and think that it’s unfair Vogel was shown the door because Westbrook had a bad season, you’re not alone, nor are you wrong.

Vogel wasn’t the one that pushed for the Lakers to trade for Westbrook, that blame lies directly on the shoulders of James and the team’s front office.

Also, it’s not as if Vogel put Westbrook in places to fail. He averaged 34 minutes per game and almost 16 field goal attempts per contest. Vogel can not facilitate or shoot the ball for Westbrook.

The Lakers are now in search of a new coach, or a LeBron assistant if you want to look at it that way. It’ll be interesting to see if the new coach can get a bit more out of Westbrook’s game and take the Lakers from being the laughing stock of last season to even just a playoff team next year.