Frank Vogel Knew Things Were Going To Go Wrong With Lakers Before The Season Even Started, Per Report 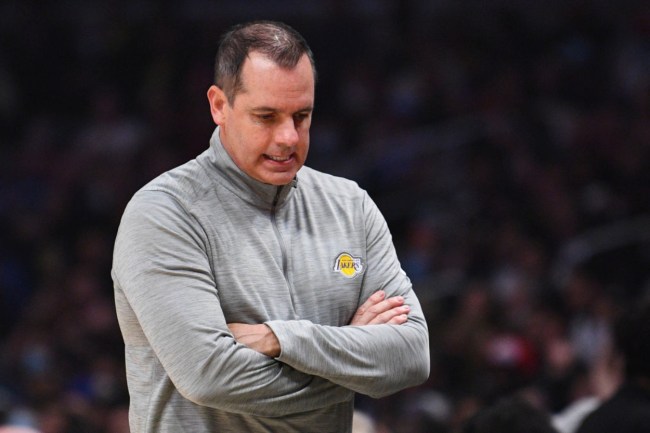 You didn’t have to be an NBA guru or basketball genius to realize that the Los Angeles Lakers weren’t going to be contenders this year after their start to the season.

The Lakers started the year 10-11 and quickly spiraled from then on out. While it may have taken fans and the media 20 or so games to see that this team wasn’t anything to write home about, head coach Frank Vogel saw the writing on the wall before the season even started.

The Athletic’s Bill Oram joined the ‘Locked on Lakers‘ podcast this week and said that he asked Vogel, who has since been fired, when he knew the Lakers weren’t going to be contenders.

According to Oram, Vogel knew that the Lakers were in store for some hurt after a performance during the preseason.

“I remember how I asked him this question. I said, ‘When did you first pick up on that this was not going to be as smooth sailing as you thought? What was the first domino of all the things to go wrong?’ Oram explained. “

“He went back to the preseason. He said when (Russell Westbrook) and (Anthony Davis) played, before LeBron ever played, it didn’t look good. That’s before they lost a single game in the regular season. Very telling, very damning, and I think that reflects really poorly on the decision-makers.”

While preseason games don’t mean anything, they certainly meant something to Vogel as he realized the team he was about to take into the regular season wasn’t going to gel well.

When it was all said and done, the Lakers finished the regular season at 33-49 not even making the play-in tournament.