Russell Wilson Thanks DK Metcalf For Following Him Back On Twitter, It Got A Little Weird 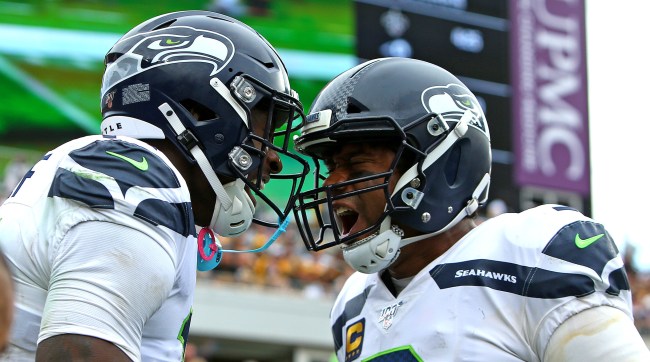 Like creating a “joint fragrance” with his wife Ciara inspired by their love.

Or giving himself the nickname “Mr. Unlimited.”

And don’t even get us started on his hair.

Sunday night, Wilson did something else that qualifies as strange when he thanked his wide receiver D.K. Metcalf for following him back on Twitter. It was weird.

Mind you, Metcalf has played 26 games in the NFL with Wilson, plus all of the training camps and voluntary workouts. So it’s not like he and Wilson barely know each other.

Then, just to keep the weirdness going, Metcalf tweeted back at Wilson.

Not done yet, Wilson then tweeted back to Metcalf.

What… is going on here? Have you ever seen two more high-profile people acting like teenagers on social media?

Even russ is a simp for dk

Send him some ya new fragrance as a thank you gift.

But why is this interaction actually so funny to me lol anyways, go Seahawks

Following the Seahawks’ big win divisional win versus the Arizona Cardinals this past week, Metcalf talked about his relationship with Wilson.

“He always talks about me being great,” said Metcalf. “And he’s already a Hall of Famer in my eyes. I’m pretty sure in everybody else’s as well. But just trying to pick his brain sometimes, of how he got to be so humble yet hungry at the same time.

“He’s always talked to me about how I can’t do what other people do or how I carry myself in the facility and outside the facility so just a big brother conversation instead of a teammate.”

Nice. Now, if he isn’t already, Wilson just has to get Metcalf to follow him on Instagram.