Listen To Audio Of Budda Baker’s Shocked Reaction To Being Run Down By D.K. Metcalf 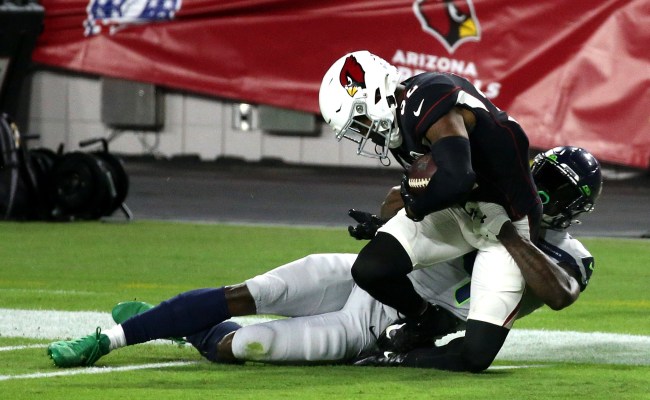 In a day filled with numerous incredible plays, the most athletic display of this past Sunday was probably when Seattle Seahawks wide receiver D.K. Metcalf ran down Arizona Cardinals defensive back Budda Baker, preventing what appeared to be a for sure pick-six.

Reactions to the incredible touchdown saving play were rightfully off the charts with even Cardinals coach Kliff Kingsbury and Baker himself being left in awe of Metcalf’s effort and flat out speed.

In fact, USA Track and Field got so many requests to put Metcalf on a relay team they tweeted out that the wide receiver was more than welcome to join them at the 2021 Olympic Trials.

For everyone asking if we have a spot open on our relay team for @dkm14, @NFL players are welcome to come test their speed against real speed next year at the Olympic Trials. https://t.co/uSf2QVIf4j

Makes sense when you remember a similar otherwordly display of speed Hill put on during a game in 2019.

Tyreek Hill is so fast he caught up with Damien Williams and helped him towards the end zone pic.twitter.com/3njXr96D2u

Now audio from the play has been released and you can hear Baker, who was mic’d up for the game, telling his teammate after the play that he couldn’t believe he got caught by Metcalf.

budda baker’s mic’d up reaction to dk metcalf chasing him down 😂😂 pic.twitter.com/huw8GGrG84

Of course, none of this should come as a terrible surprise. Metcalf already showed over the summer what an athletic freak he is when video of him jumping laterally over a series of 42-inch hurdles was released by his trainer Tracy Ford.

There was also this tweet Metcalf posted saying his speed rating in Madden NFL 21 should be higher than 95.

I don’t think they understand the work been put in! The Speed bout to be unleashed! Give my guy that 99 speed 🔥🔥🔥🔥 https://t.co/xmjtW0eOmN pic.twitter.com/PhjMiid8VL