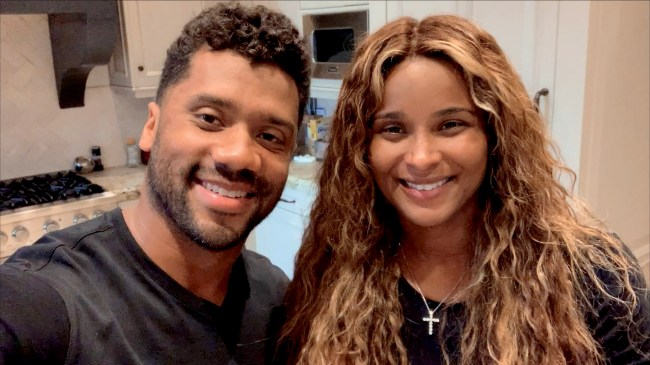 Even now and then, as if to deliberately make my life worse, the misses will shame me for not going (insert seasonal fruit or vegetable) picking with her and paying $9 for an apple cider doughnut.

She’ll pull up Instagram stories of our couple friends sitting on a stack of hay for some reason, forcing plastic smiles like the soulless J. Crew mannequins they are.

These couples are the real enemies, raising the bar with their sober “activities” for us guys who never promised our partners extraordinary lives.

And after you chop through the entire orchard and take a photo every nine steps, you’ll arrive at the Cutesie Couple Final Boss—Russell Wilson and Ciara locking arms and sipping cider in pure ecstasy. Climaxing at every sweet sip and then apologizing to God in unison.

It has just been brought to my attention that Russ and Ciara are normalizing fragrances inspired by their love for one another.

On Tuesday, the singer and the NFL quarterback announced the release of his-and-hers eau de parfums, ​R&C The Fragrance Duo, according to Page Six.

Ciara spoke about how the two would test various scents before settling on the one they chose, and I’d have to imagine Mr. Unlimited was pushed to his limits.

“You have to find ways to keep it sexy and keep it fun. We couldn’t do date night out like we usually would, but we would have an at-home date night, and we would smell each other’s scents … We would give each other challenges and wear the fragrances at different times of the day on different days and see if we both had the same reaction to the ones we loved.”

The scent combo will be available on randcfragrance.com for $90, and will include two entwined magnetic glass bottles that symbolize the couple’s bond.

(I fully respect Russell and Ciara’s seemingly genuine commitment to one another, it’s admirable, especially for celebrities. But their relationship is a threat to every average American couple out there who’s scents encapsulate ‘farting into the couch during Netflix series.’ Can’t have that.)