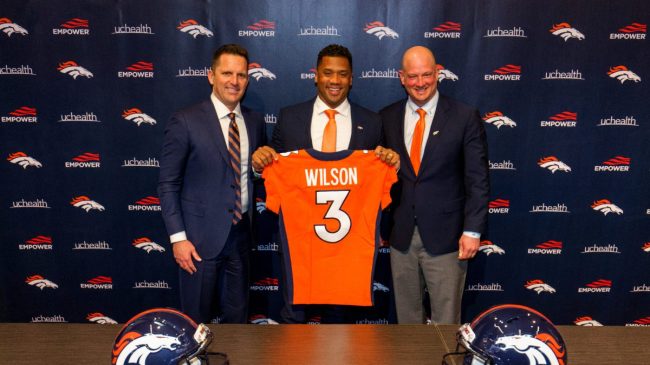 Fans are clowning Russell Wilson online after he showed up to the Broncos’ training camp facility in an absolutely gigantic truck. The quarterback is gearing up for his first season in Denver, but it looks like he’s overestimating the snowy conditions and mountainous terrains in the Mile High City.

Wilson was traded to the Broncos over the offseason after spending a decade in Seattle. With the Seahawks, he was one of the NFL’s most dangerous passers, throwing for over 37,000 yards and winning 66% of his games. He led the organization to nine 10-win campaigns and a Super Bowl title in 2014.

Now, he’s hoping to replicate that success in Denver, where he’ll compete in a division with Patrick Mahomes, Justin Herbert, and Derek Carr. Despite the stout competition, Wilson believes that he can win with the Broncos.

While the gunslinger has always been a menace on the field, he’s often viewed as being a bit of corny off of the gridiron. That apparently hasn’t changed with his move to a new team, and Broncos fans got to see it firsthand upon his arrival to training camp on Tuesday.

Wilson pulled up to training camp in an absolutely gigantic truck. It looks twice the size of the 5′ 10″ signal caller. Folks on social media were quick to give their thoughts on his arrival.

I don’t hate Russ at all but dude is so damn corny lol https://t.co/28NY84qLMr

I really hope that ain't your truck. Nothing screams "I'm compensating" quite like a truck with a hood that's taller than its owner.

Others dogged him for his outfit choice.

Did he… did he show up wearing his own jersey?

Wearing your own jersey! So humble 🤡 https://t.co/FY3dcEycZo

Wearing your own jersey anywhere but in a game is a party foul of the highest order. https://t.co/X4OCpvxjg7

Imagine showing up to camp in your own jersey lol https://t.co/6mjyLkdB9K

Pretty on brand for Wilson. But, hey, he’s a multi-millionaire who’s married to a music star so he must be doing something right.